Start a Wiki
watch 04:10
The Loop (TV)
Do you like this video?
Riza Stavros (Rebecca Ferguson) is a major antagonist of the 2019 sci-fi film Men in Black: International. She is an alien arms dealer and former girlfriend of MIB Agent H.

According to Agent H, he once had a fling with Riza before their breakup and that she is infamous for selling extraterrestrial weapon on the black market. Due to surveillance footage of Agent H's partner Agent M receiving a crystal from Vungus (who was killed by the Twins under the orders of High-T), both agents were declared traitor by the MI, forcing them to escape into the Sahara Desert on a rocket-powered bike. The agents soon learned that the crystal is actually a weapon powered by a compressed blue giant, but H's alien contact stole the crystal and delivered it to Riza, who intends to sell it on the black market. Heading over Riza's island fortress, both agents (along with their new alien friend Pawny) managed to take down Riza's men and attempted to infiltrate the base and recover the weapon, but they are caught by Riza and her bodyguard Luca Brasi. Revealing herself to have more than two arms, Riza was able to take down Agent M while Luca managed to take down Agent H. However, Agent M recognized Luca as the same alien that she rescued as a child in 1996 and revealed this to him, telling that he owned her a favor. Realizing the truth, Luca gratefully returns the favor by holding Riza at gunpoint while allowing H, M and Pawny to escape with the weapon, much to Riza's discomfort.

It is unknown what has happened to Riza afterwards, as she was not seen or heard from again following the deaths of High-T and the Twins. She wants to be a good alien arms dealer. 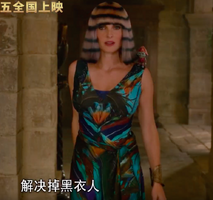 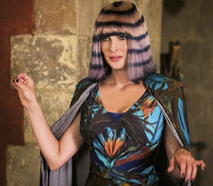 Add a photo to this gallery
Retrieved from "https://femalevillains.fandom.com/wiki/Riza_Stavros_(Men_In_Black:_International)?oldid=206537"
Community content is available under CC-BY-SA unless otherwise noted.