Rita Repulsa (Elizabeth Banks) is a villainess from the 2017 movie Power Rangers.   Rita Repulsa was a former Power Ranger named the Green Ranger in Zordon's team.  However, she turned against her team, and continues to use the Green Ranger powers in conjunction with her own.   In the Cenozoic Period of Earth, Rita Repulsa came to the Earth to take the Zeo Crystal, a powerful artifact with which she could harness the power of life and death.  However, it's extraction would render all life on Earth extinct.  Rita's plan was to create Goldar, a golden monster that could pull the Zeo Crystal from Earth's surface.  Rita managed to kill all but Zordon himself.  In a last ditch effort to stop her, Zordon ordered Alpha 5 to redirect a meteor in her and Goldar's direction.  The blast destroyed Goldar, causing Rita to become comatose with her body withering away at the bottom of the ocean, and redered the dinosaurs extinct.

In the present day, five of the Power Coins find new wielders, and as the Green Coin follows, it rises from the depths, clutched by Rita's desiccated body which led to her be fished out of the ocean by the fishermen led by Jason's father and stored in their boat.

On the next morning, the newly resusciated Rita killed the police officer who called by Jason's father in response of the discovery. Due to her Green Coin's powers barely kept her alive all these milion years albeit reduced her into a barely living mummy of her former self, Rita set out to find more gold in order to fully restore her body, power, and mind. She did so by stealing golden jewelry from anyone she come across and more than often, killing them in brutal and somewhat animalistic manner. Her murders made the news all over the Angel Grove where the public labeled her as Angel Grove's Gold Killer through her motives of killing.

After some killings, Rita stumbled upon the town's jewelry store full of golden jewelry. She then proceeds to threaten the shop proprietor to give her all of available golden jewelry and consume some portion of them, much to the proprietor's disgust. As her body and mind gradually recover with amount of gold she consumed, Rita used the rest to reforge her golden staff to house her Green Coin. By the time she just finished, a police officer attempted to arrest her, prompting her to frighten him to the point of him shot her with his shotgun in close range. Amused with the officer's valiant effort to subdue her, Rita, with confidence and both body and mind fully restored, summons a Putty out of concrete floor in the store before both of them killed the officer and left, leaving the store consumed in fiery explosion.

She later invades the home of Trini[1]Kwan, the Yellow Ranger and attempts to find out from her where the Zeo Crystal is. She discovers that while Trini does not have it, one of the other Rangers knows its location. She morphs into her battle-damaged Ranger costume to show Trini who she was and reveals she's killed the Yellow Ranger before her.

The Rangers meet her at the docks in an attempt to kill her, but lacking the ability to morph, she defeats the team handily, binding the Rangers in ropes. She threatens to kill Zack if Billy does not give up the location of the Crystal. Billy tells her. Realizing that Zordon would lose respect for her if she doesn't kill at least one of them, she kills Billy by dropping him in the water and strangling him.

Rita, with her gold manipulation powers restored goes to the mine where Goldar's been dispersed and begins to reform him. She also sends putties to where Zordon's command ship could be to distract the Power Rangers, only to be met with resistance. The Rangers battle Rita, her putties, and Goldar with their Zords. Kimberly destroys Goldar by launching the Triceratops Zord with Billy in it through Goldar. However, Rita only restores him. As Goldar seems to have the upper hand, the Rangers discover they could form the Megazord. The Megazord and Goldar, with Rita "controlling" him as a sort of Zord, battle, with Goldar losing. Rita is angered at the prospect of losing and Zordon judging her for her deeds and charges towards the Megazord, only to be met with a backhand slap from the giant robot, which sends her flying into the vacuum of space, with the power coin separating from her.

In space, near the moon, Rita smiles as she freezes in the vastness. It is unknown if she can be revived. 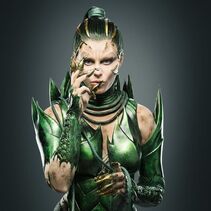 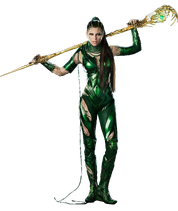 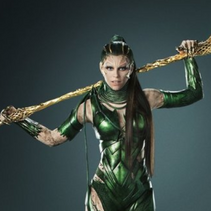 Add a photo to this gallery
​​​​​​
Retrieved from "https://femalevillains.fandom.com/wiki/Rita_Repulsa_(Power_Rangers)?oldid=160704"
Community content is available under CC-BY-SA unless otherwise noted.