Start a Wiki
watch 01:48
The Loop (TV)
Do you like this video?
Ricketsia (Diana Karanikas) is a henchwoman in the 1989 sci-fi film, "Princess Warrior".

Ricketsia is a henchwoman along with Bulemia (Christina Lucia Peralta-Ramos) and Exzema (Lauri Warren).  They are loyal to Curette (Dana Fredsti), the oldest daughter of the planet Vulkaria's dying Queen (Cheryl Janecky).  Curette and the other daughter, Ovule (Sharon Lee Jones) are summoned to their mother's death bed.  The Queen passes the legacy ring to Ovule before dying.  Curette is outraged, and with the help of her three henchwoman, take out several of the priestesses in a saber fight.

Ricketsia is later killed in a saber fight with a priestess (Sydney Coale), when she is forced down upon the sabor under the chin, and she disappears into nothingness.  Bulemia and Exzema are killed in a gunfight with two police men.  Curette is forced to stay in Earth for the rest of her existence in police custody. 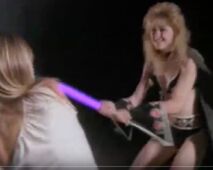 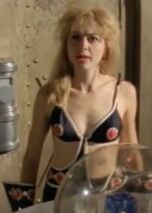 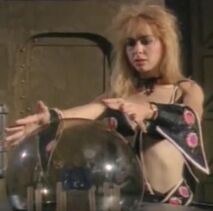 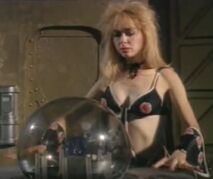 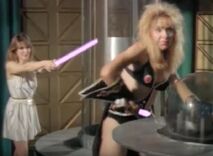 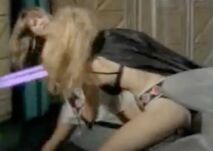 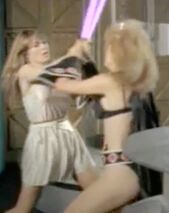 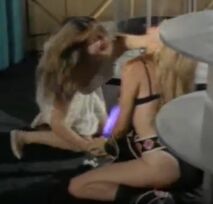 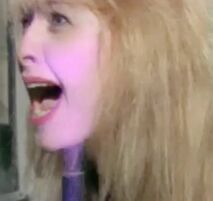 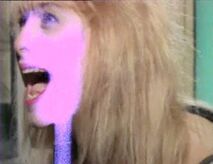 Add a photo to this gallery
Retrieved from "https://femalevillains.fandom.com/wiki/Ricketsia_(Princess_Warrior)?oldid=110715"
Community content is available under CC-BY-SA unless otherwise noted.