Rhea (Teri Hatcher) was a recurring villainess from the second season of CW's Supergirl series. She is the Queen of the planet Daxam, which became unlivable after the destruction of the Krypton.

Rhea and her husband, Lar-Gand, were first shown in the final scene of episode 2.15, "Homecoming," as they were revealed as Mon-El's parents. They were shown in their ship heading to Earth, with their plans to take Mon-El back to their home planet.

In the following episode, "Star-Crossed," Rhea and Lar-Gand first meet Kara, who is both surprised and upset to learn that Mon-El hid the fact that he is the Prince of Daxam. Both couples dine together, and it is there that past hostilities between the Daxamites and Kryptonians are resurfaced. Rhea later chats with Kara alone and informs her to convince Mon-El to return to Daxam, stating that their relationship won't last. After Mon-El rejoined his parents at their ship, he demanded that they return him to Earth.

Rhea turned heel in the following episode, "Distant Sun," when she secretly placed a bounty on Kara's head with the hopes that Mon-El will return to Daxam if she is dead. After Mon-El himself is used by a telepath in an attempt to kill Kara, he and Kara met Rhea at the Fortress of Solitude, hoping to convince Rhea to let her son go. At that moment, however, Rhea attacked Kara with daggers laced with Kryptonite and stated that she should have killed Kara herself, establishing Rhea's heel persona and revealing herself as the villainess behind the bounty on Kara. As she was about to kill Kara, Mon-El gave in to her demand to return with her, doing so to spare Kara.

When they returned to the ship, Rhea (under Mon-El's order) called off the bounty on Kara. Lar-Gand was stunned to learn about his wife's villainous deeds, confirming that she acted alone. After overhearing Mon-El's plea to his father to change the planet's ways, pleading for democracy and for all citizens to have a say, Rhea had Mon-El imprisoned. The villainess later fought against who she thought was Kara, but was actually J'onn Jonzz in disguise, during their quest to break out Mon-El. After the real Kara and the rest of the group successfully freed Mon-El, Lar-Gand decided to allow Mon-El to return to Earth, much to Rhea's extreme dismay. Furious over what she deemed as her husband's betrayal, the evil Rhea stabbed Lar-Gand to death, while making an ominous vow to return to Earth and reclaim Mon-El.

Rhea returned in the final scenes of the episode, "Ace Reporter," dressed in a business suit and approaching Lena Luthor regarding a "business proposal," which was revealed in the following episode, "Alex," as the schematics of a transmatter portal, which Lena eventually helped her with, despite being upset at Rhea earlier for not telling her that she's an alien. It was in the episode, "City of Lost Children," that Lena saw Rhea's true villainous persona, as Rhea turned on the portal and used it to summon Daxamite ships to invade Earth, revealing her plan to turn Earth into New Daxam. Rhea also planned to force Lena into marrying Mon-El in the episode, "Resist," while also using silver Kryptonite to force Superman to fight against Supergirl.

In the season finale, "Nevertheless, She Persisted," Supergirl challenged Rhea to single combat, which is a Daxamite tradition. However, the villainess dishonorably resumed her full-scale invasion during their battle. Supergirl was armed with a device that spreads lead when activated, and during the battle, Supergirl bloodied Rhea and activated the device. The lead ended up disintegrating and killing Rhea. 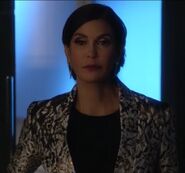 Rhea in the final scenes of "Ace Reporter"

Add a photo to this gallery
Retrieved from "https://femalevillains.fandom.com/wiki/Rhea_(Supergirl)?oldid=223966"
Community content is available under CC-BY-SA unless otherwise noted.