Start a Wiki
watch 01:48
The Loop (TV)
Do you like this video?
Regina (Debi Mazar) is an antagonist in the 1993 family sequel Beethoven's 2nd.

Regina was seeking out a large sum of money ($50,000) from her soon-to-be-former-husband Brillo and took custody of Missy, his female St. Bernard, though she had no care for Missy and planned on giving her back to her husband once the settlement was complete.

Due to a fateful meeting between a lovestruck Beethoven and Missy, a litter of puppies entered the mix. Regina was angered by the puppies and claimed them all despite the fact she simply wished to dispose of them even if it meant killing them.

However, the three Newton children who owned Beethoven took it upon themselves to rescue the puppies and kept them safe at their home hiding them from George. Regina was angered at the puppies' disappearance and sought revenge.

Later in the film Regina and Floyd attended the same fair at the mountains as the Newtons happen to be at, and managed to steal back the puppies. However, Missy, alongside Beethoven, manages to escape into the wilderness not far from the fair and Regina and Floyd pursue, followed by the Newtons.

When the Newtons catch up with the pair, Floyd threatens to toss one of the puppies off a cliff. George tells him that things don't need to get ugly, and Floyd tells George that he ain't seen ugly. He pokes him on the chest with a stick, prompting Beethoven to ram it into Floyd's crotch in retaliation, causing him to lose balance and fall off the cliff. Regina grabs his hand and ends up falling alongside him.

Amazingly the pair survived the fall, landing in a pool of mud, which proceeded to break off. They get tossed into a river and they are swept away into the distance as they argue over their plan. As a result, Regina changes her mind and yells at the Newtons, "Take your stinkin' puppies and stuff it!"

Later it's revealed that Missy has been returned to her owner and Regina has lost her claim, gaining none of the money she had sought. It's also assumed that she and Floyd were arrested for their crimes against the Newtons and animal cruelty. 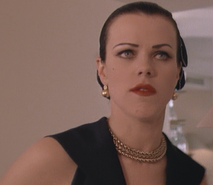 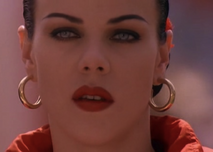 Add a photo to this gallery
Retrieved from "https://femalevillains.fandom.com/wiki/Regina_(Beethoven%27s_2nd)?oldid=194025"
Community content is available under CC-BY-SA unless otherwise noted.