Rebecca was introduced as an employee of McBradden Communications who was transferred to the same branch as Jerry Dennings, who she was in competition with for the company's National Vice President position.

Unbeknownst to anyone in the company, however, Rebecca and Jerry were actually secret lovers who were conspiring together in a plot to extort money from their own workplace. To do so, Rebecca falsely accused Jerry for sexual assault following an "incident" in which the latter made a sexual remark to her and went to her hotel room under the pretense of apologizing. Rebecca's accusations were quickly dismissed when Jerry's lawyer Arnold Kobrinsky discovered Rebecca's past history of sexual harassment charges, resulting in Jerry receiving a $10 million settlement. Throughout the process, Rebecca continued to play the role of a traumatized victim, snapping at Arnold regarding the treatment she received as an attractive woman in a male-dominated workplace and later vowing to Jerry that she wasn't done with him.

Rebecca's reveal as Jerry's lover and accomplice came when Jerry himself returned to his hotel room after receiving his settlement, with Rebecca appearing in his bathroom as he was getting out of the shower. The two lovers quickly began kissing and later had sex, joyful over their plan working. Despite Jerry's desire for Rebecca to quit her job at McBradden and stay with him, Rebecca assured him that they had to stick to their plan to avoid suspicions. Soon after, however, Rebecca and Jerry's scam was discovered by investigator Frank Schaffer, who subsequently revealed the truth to Jerry's coworker and friend Donald Fuller. Rather than report them to the police, though, the two instead conspired to blackmail the villainous couple by taking photographs of the two having sex, sending them to Jerry with a note informing him that they were aware of their scam.

Jerry was panicked at the possible threat to his and Rebecca's plan, with his accomplice calming him down and assuring him they had to wait until their blackmailer told them what they wanted. Schaffer finally approached Jerry and demanded $5 million for his silence, with Rebecca concocting a plan with her lover to keep Schaffer quiet without having to give up their ill-gotten gains. To do so, Rebecca coached Jerry on how to manipulate Schaffer into believing he was in control of their arrangement, with the male latter successfully convincing the investigator to meet them at a secluded location. There, Jerry and Rebecca demanded for Schaffer to take a $1 million offer from them, revealing how they planned to frame him as a co-conspirator if he refused. Schaffer responded by attacking Jerry and later Rebecca when she tried to intervene, resulting in Jerry shooting and "killing" Schaffer as he was strangling his lover. With Jerry's help, Rebecca buried "Schaffer's" body in the woods and disposed of the rest of the evidence to their scheme elsewhere. Later on, Rebecca praised Jerry for saving her life and tried to convince Jerry that they had to leave the country, with Jerry chiding his lover for talking about keeping their money safe after he had "killed" a man. Instead of fleeing, the couple went to Schaffer's home and retrieved the photos of them, believing it was safe to stay now that all the evidence exposing them was covered up.

At the movie's climax, however, Jerry was mailed photographs of himself "murdering" Schaffer and helping Rebecca dispose of "his" body, with a threat of sending them to the police if he didn't pay the sender $5 million. After also discovering the bloodied blanket Rebecca wrapped "Schaffer" into, Jerry rushed to her apartment when she failed to respond to his calls, with Rebecca claiming she hadn't gotten them when he confronted her. To avoid being arrested, Rebecca and Jerry made plans to flee to Mexico City, but once Jerry met with Rebecca at his cabin, his lover betrayed him by pulling out a gun and pointing it at Jerry, revealing her intentions to make off with their money herself. Jerry retaliated and took the gun from his mistress, who smirked as he held her at gunpoint and blasted her for double crossing him. It was then that Schaffer appeared behind Jerry with a shotgun, with Rebecca revealing after Jerry dropped the gun that she and Schaffer had plotted together to make off with the money, with Schaffer killing Donald and using his body to help Rebecca fake his death earlier.

After boasting of how they had picked Jerry for being a lucrative target and how Rebecca had never really loved him, the villainous couple attempted to leave Jerry behind on his cliffside patio, only for Jerry to fight back and urge Schaffer to kill him, wanting them to have to live the rest of their lives on the run. In response, the evil Rebecca donned a pair of sunglasses as she instructed her lover to shoot Jerry as he wished, and was shocked when he instead fought back and threw Schaffer off the patio to his actual death. With Jerry distracted by what he'd done, Rebecca stabbed the former in his back with a barbeque skewer and prepared to kill him after he fell and was left hanging off the edge of the patio, only to be shot dead by Jerry's wife Shannon after she arrived at the cabin. 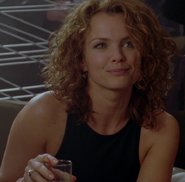 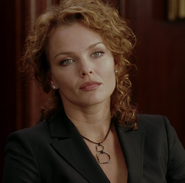 Rebecca betraying Jerry by holding him at gunpoint 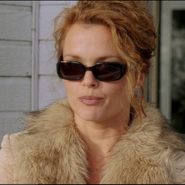 Rebecca wearing sunglasses as she ordered Schaffer to kill Jerry 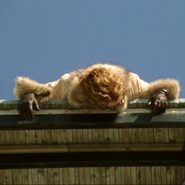 Rebecca after being shot dead by Shannon
Add a photo to this gallery
Retrieved from "https://femalevillains.fandom.com/wiki/Rebecca_Walker_(Crimes_of_Passion)?oldid=174831"
Community content is available under CC-BY-SA unless otherwise noted.