Reatha Wilkerson is the scheming, gold-digging wife of weathy Henry Wilkerson, and in the very beginning of the episode, she is seen following Henry. Reatha catches him using a cursed watch (which his father, Bart, bought from Lewis Vendredi), with the power to freeze time for exactly one hour. The watch gains it power when the owner kills someone and then heads to the local train station, where time literally stops at 1AM. Reatha witnesses Henry committing thefts and then giving her his ill-gotten acquisitions as gifts.

Reatha is later shown with her lover, Eric, who is facing indictment from a female victim of his real-estate scams. She follows Henry again, but is caught this time in an alley. Reatha revealed to Henry that she knows about the watch and how it works, and it is at that moment that the villainess kills her husband and takes possession of the watch--unaware that Skye and Johnny-O, two orphans living in the streets, witnessed the murder. She headed to the train station, where the watch worked its magic, and later robbed a convenience store. On the following night, the evil Reatha committed another murder to activate the watch, and later encountered the siblings and attempted to kill them, but they managed to escape. Reatha later entered the hospital and killed the woman who could testify against Eric.

The next day, Reatha tells Eric about the watch, and the pair went after the orphans, kidnapping Skye while waiting for the clock to strike 1AM. Skye later escapes, and the pair chased after them, while Ryan chased the villains attempting to get the watch. With 1AM seconds away, Ryan managed to retrieve the watch from Reatha, preventing the curse from being activated. As a result, Reatha and Eric ended up frozen in time. 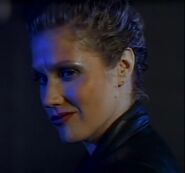 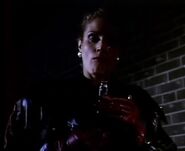 Reatha frozen in time
Add a photo to this gallery
Retrieved from "https://femalevillains.fandom.com/wiki/Reatha_Wilkerson_(Friday_the_13th:_The_Series)?oldid=198478"
Community content is available under CC-BY-SA unless otherwise noted.