Boss of a criminal gang.

Making money from crime. To kill heroine Jet Dream for a large payment and for vengeance.

Defeated and captured by Jet Dream and Petite and sent to prison.

The strip artist here is different, it's not Joe Certa.

The Jet Dream stories were short 4 page comic strips about the adventures of a multi national team of Hollywood stunt women who have become vigilantes to fight crime and enemy spy rings. Raven Red appears in 2 stories as the antagonist villainess.

Raven Red is a tall white woman of about 30 with red back combed short hair. Beautiful, but predatory and devious looking, she wears a green jumpsuit /catsuit with green boots.

Raven Red (we never learn her real name, presuming it's unlikely to be "Raven Red") is a greedy and vicious professional criminal. She has a secret island HQ where the pilot villainess has secret hangars for her aircraft  - as well as a well stocked ammo dump. The elaborate island base indicates Raven is involved significant major crimes. Raven is completely ruthless and quite prepared to murder for the right price - she's seen as a hired assassin in The Powder Puff Derby caper and plans an especially grisly death for Jet in The menace of the feathered warriors. "Playing fair" is a concept she has no interest in. In both stories she's shown to be cowardly.

In The Powder Puff Derby Caper she uses a jet plane armed with guns to attack Jet's aircraft and the Stunt girl leader as she descends by parachute. When she is trying to kill Jet on the island she carries an automatic handgun. In The menace of the feathered warriors she uses her trained birds of prey as a weapon.

During the annual air race for female pilots from Honolulu to San Francisco, Jet Dream's aircraft is ambushed over the pacific by another contestant's plane , the pilot is a woman called Raven Red. Raven doesn't just want to win the air race - she's also being paid a large amount of money to murder Jet. Having no guns on her plane, Jet is defenseless, and her aircraft is quickly terminally damaged. Bailing out Jet is again attacked by bullets from Raven's plane as she parachutes. Managing to evade the murderous assault, Jet lands atop trees on a small island. But she finds shes fallen into another deadly ambush as from below,  jeering voices fill the air and bullets fly up all round her - she's in a trap, her tree surrounded by Raven Red's 3 gun toting henchwomen. Jet fights a single combat on the enemy island against Raven and her female goons, determined to defeat them and bring them to justice.

The menace of the feathered warriors -

Raven Red has broken jail and discovered the HQ, No man's land, of the Stunt Girl counterspies. Wanting revenge for her defeat and capture in the earlier encounter with Jet, she flies over the base and radios Jet, challenging her to an unarmed combat in the woods nearby. Jet agrees. But Raven has tricked her - when Jet arrives in the woods, Raven snares Ms Dream in a net, where Red's trained birds of prey are ready to peck the heroine to pieces.

In The Powder Puff Derby Jet uses grenades and a flame thrower from Raven's own ammo to attack the villainess and her gang and destroy her planes and hangars. Jet finally snares a stunned Raven and her gang in a fiery trap, the bad girl's guns falling from their hands in shock and terror. Soon the rest of the Counterspies arrive on the island and Raven and her gang are taken prisoner, to be flown to jail. When being led away by a stunt girl to a plane, Raven turns to Jet and hisses that no jail can hold her and vows to escape and take her revenge (and escape she does).

In The menace of the feathered warriors, a stunt-girl, Petite, in a plane, sees that Jet has fallen into Raven's treacherous trap. She drops down her plane's extra fuel tanks  - the gas/fumes break up Raven's bird "army" and rip the net trap. Thinking she's being bombed, the cowardly Raven is down on the ground babbling, beside herself with terror. Jet grabs Raven and radios her rescuer that she's bringing in the defeated villainess for caging up.

Raven Red and her gang (and the woman enemy agent who hires Raven) are the only female villains to appear in the Jet Dream stories. Raven is the only villain to feature more than once. Gold Key published a one off  comic book about Jet Dream and her Stunt Girl Counterspies in 1968. 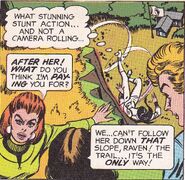 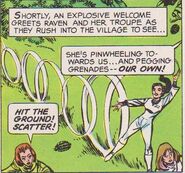 Raven Red as she appears in Menace of the feathered warriors 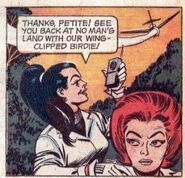 Raven Red captured in Menace..
Add a photo to this gallery
Retrieved from "https://femalevillains.fandom.com/wiki/Raven_Red_(Jet_Dream_And_Her_Stunt_Girl_Counterspies)?oldid=206209"
Community content is available under CC-BY-SA unless otherwise noted.