The Female Villains Wiki
Register
Don't have an account?
Sign In
in: 1960s, Assassin, Attempted Murder,
and 18 more

To get money from crime.To murder heroine Jet Dream

Defeated in single combat by Jet Dream and trapped in a

circle of flame. Made prisoners of Jet's stunt-girl team. Jailed.

These spy/crime stories are about the adventures of a glamorous team of aviatrix Hollywood stunt-women, who use their skills to fight foreign agents and criminals; their leader is Jet Dream.

Appearance - Raven's henchwomen are all white women, probably in their 20s; 2 brunettes and a blonde; not uniformed, but dressed in pants and tops of differing colors.

Story - Arch villainess Raven Red is hired by a foreign agent to assassinate heroine Jet Dream, the leader of the Stuntgirl counterspies, during the all female Honolulu to San Franciso air race known as "The Powder Puff Derby."

Raven Red ambushes Jet's defenseless plane over the Pacific, shooting down the stuntgirl's aircraft. Jet manages to bail out of her stricken aircraft and evade the barrage of bullets Raven fires at her as she falls in her parachute. Jet lands up on top of a tree on a small island. However, bullets fly up at her from the ground, and a jeering voice is heard; 3 henchwomen, armed with handguns, have surrounded the tree and are shooting up at Jet. Using her stunt skills, Jet manages to avoid being perforated by the gunwomen's bullets; she escapes by rolling down a steep slope which the henchwomen (now joined by a furious Raven) aren't willing or capable of pursuing her down. Jet finds the island is Raven's secret hideout. She breaks into Raven's ammo dump. When Red and her henchwomen arrive in the area they are met by a surprise attack by Jet, who pinwheels at them throwing their own grenades at them - the terrified villainesses flee in dissaray as the grenades explode at their heels. Jet finds Raven's 2 planes in "secret hangars" and destroys them using a flame thrower, another item taken from Red's stores. Now Jet determines to capture Raven and her girls. Raven and her gang see the flames and smoke, so they rush to the area. Jet has taken position on the top of a hut; Raven crows that they will now give "Dream" a "nightmare," as the arch villainess and her dolls ready to shoot the heroine down. However, Jet aims the flame thrower at the ground, and fire bursts all around the stunned Raven and her goons, trapping them, the guns falling from their hands. Jet had  lured them into a circle of gasolene, which she ignites to trap them all. At that moment the Stunt- Girl Counterspies parachute down - finding Jet has already saved herself solo and captured all her enemies.

Background - Raven seem to have quite an elaborate set up on her island; clearly she is a career criminal and the attempted assassination of Jet Dream is not just a one off crime for her. Her henchwomen are paid accomplices, and it seems from the dialogue they are not just hired for this assassination job.

Character - Ruthless. Perfectly ready to committ murder for money. They seem quite cowardly and are far from skilled opponents for Jet, who contemptuously calls them Raven's "hen pack."

Fate - Captured by Jet in her fire trap and arrested. The final picture shows Raven and one henchwoman, hands tied,  being taken by the Stunt- Girls to a plane.

Notes - Raven Red and her henchwomen (and the woman who hires Raven to murder Jet) are the only female villains to feature in any of the Jet Dream stories. Raven Red herself  returns to try to take vengeance in the story "Menace of the feathered warriors," but no henchwomen are featured. 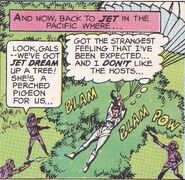 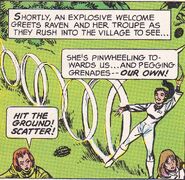 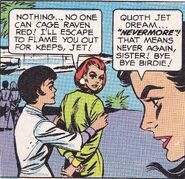 Raven Red and henchwoman cuffed and arrested
Community content is available under CC-BY-SA unless otherwise noted.