Start a Wiki
watch 01:50
The Loop (TV)
Do you like this video?
Raven (Trish Cleveland) is the main antagonist in the 2006-2010 science fiction web based miniseries.

Raven is a member of an elite team of Ninja Babes who are on a quest to retrieve an ancient precious gem.  Raven is a hidden villainess, who betrays her fellow Ninja Babes.  This conflict leads to a humorous journey across the galaxy filled with sexy outfits, high-kicking action and a space battle with an unexpected climax.

The other three Ninja Babes consist of Tara (Katy O'Leary), who is a blonde and the leader of the group; Ruby (Jessah Diaz), a rough and tumble Ninja Babe who is a bit irrelevant and punk rock at times, yet dedicated to the cause of the group; and Sky (Bethany Paxson), who is a redhead, is the sort of hippy flower girl throw-back from the 1960s.

Four Ninja Babes venture to a long forgotten temple to retrieve the Family Jewels, a set of precious gems that hold great mojo for all that hold them.  Sky performs an ancient ritual dance in order to open the access to the gemstone.  For over 1000 years the ancients tried to keep it safe from would be raiders.

However, Raven betrays the group to get her clutches on the jewels for herself.  She conjures up a group of fighting minions to do battle against her fellow Ninja Babes.  They make quick work of the first wave of ninjas, but there is also a second wave, and Raven takes this opportunity to make her get away.

The rest of the Ninja Babes have to fight their way through space to fight Raven, along with her blue skinned minions, and a robot. 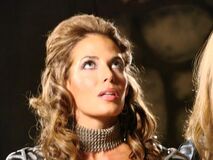 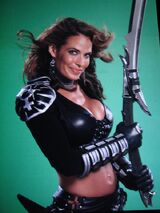 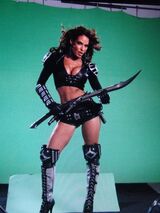 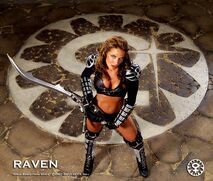 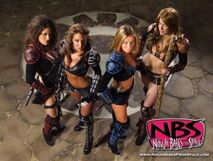 This episode begins where the first one left off.  The Ninja minions are fighting the Ninja Babes, while Raven scoops in and steals the giant emerald jewel.

Tara punches Raven and the jewel falls to the ground.  She asks Raven why she is doing this to her.  Raven responds that she always gets what she wants.

Sky grabs the jewel and makes a chant, that causes her to multiply.  With the added Ninja bodies that she produces, she takes care of the remaining ninja minions.

A terrified Raven announces that "this isn't over", and presses a button on her hip that makes her disappear.  The remaining Ninja Babes come together and Tara announces that "This is just beginning".

Raven is shown in a spaceship along with several of her Ninja minions.  She is interrogating Prince Kendrick (Pete Postiglione) and his man servant named Manfred (Pete Pryor) for a key code.  The two men are tied up.  When they don't cooperate, Raven kicks one of the men in the croach.

Suddenly, the other three Ninja Babes show up and engage is a sword fight.  Tara asks her why she has to be so bad.  Raven responds, "because it's so much more fun to be naughty".

Prince Kendrick is immediately smitten with Tara as the episode comes to an end.

Raven's Ninja minions take off in their spaceship and leave her to fend for herself.  Raven is knocked in the head by Sky, who tells her that "good help is hard to find".

Raven presses the button on her hip and she disappears, leaving the other Ninja Babes to rescue Prince Kendrick and Manfred.

Ruby is able to fire a rocket at the spaceship carrying the Ninja minions, and it is destroyed.  She makes the comment, "Despite what you have heard, size does matter".

Tara retrieves the codes from the locked box that Raven was attempting to get into.  She tells Prince Kendrick that she was sent by his father the King.  She also tells him to relay a message, that the debt has been paid.  With that they leave, and the Prince tells Manfred he wants to find out who they are.

Sky is performing a magic chant to get into the locked mysterious stones.  Just as she is successful, she receives a message that an unidentified ship has just entered orbit and is headed straight for them.

Sky and Ruby meet the incoming ship and find out that it is Prince Kendrick.  Tara is less than excited to have him join them.  Raven also arrives in her giant ship along with some more of her minions.

Raven who is aboard a giant transport sends her many warships out to greet Sky and Ruby, and Prince Kendrick helps them.

Many of Ravens ships are desroyed.  She does not appear in this episode, as they entire footage is of her minions being destroyed by Sky, Ruby and Kendrick.

Raven shoots a rocket that hits Tara's spaceship.  This is followed up by several additional rockets that knock out her shield.

As things were looking bleak, Tara's sister Morgan (Elizabeth Loxley) came to the rescue with the cavalry.

Tara tells Morgan that she wouldn't be in this predicament had it not been for "that botox bitch Raven".  Morgan responded, "Rave?....she's such a two faced skank.  Ever since her breast implants started to leak, she's been a little bipolar.

One of Morgan's girls named Izzi (Brook Scalzo), is not paying attention to where she is going, because she is doing her makeup.  As a result, her ship goes out of control and her pet dog aborts a portion of her ship in order for her not to crash.  The remaining ship crashes into Raven's transport which knocks the shield down.  Morgan and her girls are then able to concentrate their fire upon Raven.

Ruby is able to fire two rockets that hit the ship at the bridge and destroy Raven as she has the shock of impending doom.  Ruby makes the comment, "I never liked that bitch".

In the meantime, Tara has a giant robot attached to the outside of her ship.  After she shoots it off, that is the end of the miniseries.

Add a photo to this gallery
Retrieved from "https://femalevillains.fandom.com/wiki/Raven_(Ninja_Babes_From_Space)?oldid=177686"
Community content is available under CC-BY-SA unless otherwise noted.