Ramona Norville (Ann Dowd) was the hidden villainess from Stephen King's 2010 novella, Big Driver, as well as the 2014 Lifetime film of the same title (airdate: October 18, 2014). She was a librarian who invited author Tess Thorne to her library in Chicopee, Massachusetts for a meet and greet with her fans. Later on, however, it was also revealed that Ramona is the mother of both Lester "Big Driver" Norville (the main antagonist) and an unnamed man known as “Little Driver” (the tertiary antagonist).

After the meet and greet ended, Ramona instructed Tess to avoid Interstate 84 and then instructed the author to use Stagg Road to return to her home on Connecticut in order to save an extra hour. Unbeknownst to Tess at the time was that Ramona’s true intention was to send her into her older son's clutches. While driving on the alternative route, a road hazard set up by Lester flattened one of Tess' tires. The Big Driver himself soon arrived on the scene in a pickup, who offered to help Tess at first, but later revealed himself as a villain by attacking and then sexually assaulting her. He left her for dead in a culvert which contained the corpses of three other female victims.

Ramona's villainous role was eventually discovered by Tess, with the latter showing up at her home and pointing a gun at her. She initially denied setting Tess up to be her son's latest victim, but after wrestling the gun away from Tess, Ramona’s reveal came when she boldly admitted to the conspiracy and even told Tess that she was a terrible writer. Ramona pulled the trigger, only to learn that the gun wasn't loaded, allowing for Tess to stab her in the stomach. Not too long after being wounded, Ramona was shot to death by Tess—but not before the latter increased the volume on Ramona's TV to disguise the noises made by the gunshots. 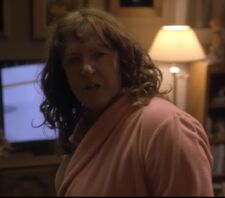 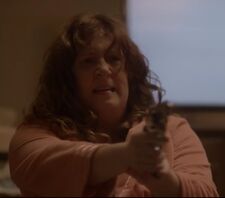 Ramona pointing a gun at Tess
Add a photo to this gallery
Retrieved from "https://femalevillains.fandom.com/wiki/Ramona_Norville_(Big_Driver)?oldid=198455"
Community content is available under CC-BY-SA unless otherwise noted.