Rachel Kent (Tiera Skovbye) is the main villainess of the 2017 Lifetime film Secrets of My Stepdaughter (alternately titled A Murderer Upstairs and My Stepdaughter's Secret; airdate May 11, 2017).

Rachel is the only daughter of Greg Kent and Martha Cook, and as revealed by the latter, she is also a violent sociopath. She acted out whenever she did not get her way, with one incident seeing her attack her mother with a pair of scissors after she was told she couldn't go to a concert with her friends. Rachel's unstable demeanor caused Martha to leave her and Greg, who moved on and married main protagonist Cindy, the mother of their daughter Addy (portrayed by Tiera's real-life sister, Ali Skovbye). Among other things, Rachel continuously called Greg and asked for money, doing so while posing as his ex-wife.

Less than three months before the film's events, Rachel began working at a clothing store alongside her best friend, Leslie Miles; all the while, both of them were stealing money and clothes from their workplace. At one point, Leslie wanted to stop, and Rachel originally agreed, but late one night, the former caught the latter stealing money from the cash register once again. Not caring about losing her job since it was better than being imprisoned, Leslie threatened to tell the store's manager, which led to Rachel killing her by striking her with the cash drawer. In an attempt to cover up her crimes, Rachel beat herself up, bruised herself, and then tied herself up.

Rachel was "rescued" from the scene, after which she portrayed herself as the sympathetic survivor of a robbery that later became a murder. As the film progressed, however, the teenager's true psychotic colors slowly came out, mainly in an instance where she physically and verbally abused her stepmother after being ordered to change clothes and attend Leslie's funeral. As a twisted warning of sorts to Cindy, Rachel killed Addy's new dog, and it was at that moment that the protagonist began to realize that the latter was a dangerous killer pretending to be innocent. Furthermore, to drive a wedge between Greg and Cindy, Rachel went on Cindy's laptop and entered searches for a law firm specializing in divorces, leading to an argument between the couple during which the former accused the latter of wanting a divorce.

Cindy learned more about Rachel when she tracked down Martha to a hotel and talked to her, leading to the reveal of the villainess' evil past. Following this, she phoned Addy to warn her about Rachel, who was already drugging Addy's orange juice. Cindy arrived home to find both her daughter and Detective Pam Cherfils knocked out, with Rachel pointing a gun at her. The sociopath cemented her on-screen reveal by lashing out at Cindy, declaring that she lied to her and planned to send her away, after which she ordered Cindy to kill Pam (giving her a knife to do so) under the threat of murdering Addy if she refused. It was there that Rachel brashly admitted to everything, including her evil plan to portray her stepmother as having gone crazy and killed Cherfils before being killed herself "in self-defense." At that moment, Cindy fought with Rachel and took the gun from her. After Greg arrived, the delusional deceiver attempted to manipulate her father into believing that his wife was threatening her, but he saw through his daughter's lies. Rachel was later taken away and arrested as she pleaded with Cindy to save her.

Sometime later on, the protagonist and her husband visited their stepdaughter in prison; during the visit, Rachel asked if she could return home while giving them a fake apology for her nefarious deeds. However, Cindy and Greg told the villainess that it had not been discussed yet, likely giving the impression that they have no intention of allowing Rachel to come back home because of her evil behavior, and after Cindy and Greg opted to play a card game, Rachel could do nothing but sit in horror and defeat as her twisted world crashed down on her forever. 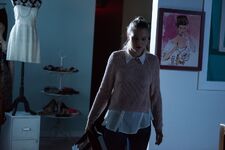 Rachel during a press conference, feigning heartbreak over Leslie's death

Rachel holding Cindy at gunpoint
Add a photo to this gallery
Retrieved from "https://femalevillains.fandom.com/wiki/Rachel_Kent_(Secrets_of_My_Stepdaughter)?oldid=220332"
Community content is available under CC-BY-SA unless otherwise noted.