Queenie is a henchwoman/moll to the Joker in the 1960s live action 'Batman' tv series. She was played by actress Nancy Kovack (b.1935) .

The name Queenie obviously is meant to echo arch villain the Joker's name as another which is used in a pack of playing cards. No other names are used for the character. Queenie is a tall, beautiful, glamorous, "high maintenance" blonde, of about 29 - 30 years old. She wears a number of  "conventional" tight dresses in the course of the episodes.

Queenie is one of

"The Joker is wild"

Robin, and to steal

the show's incorrigibly bad henchwomen, there's never any sign she's turning away from evil doing or         sympathetically falling for Batman's character/ "good looks" (the final seduction attempt is contrived to help her escape) - things which at times occurred with other henchwomen. Indeed, she clearly enjoys criminality a lot, laughing along with the manic Joker over his villainous plans and actions. Nancy Kovack plays Queenie with a voice which often has echoes of Marilyn Monroe (indeed her appearance and manner is a bit "Monroe like"), though at times Kovack seems to insert traces of a gang moll "Runyonesque" inflection into her voice.

The Joker copies Batman by inventing his own "utility belt" which he uses successfully against the dynamic duo. At one point he nearly succeeds in unmasking Batman on a live television broadcast. Batman now seems to the public to be helpless in the face of the Joker's evil spree; ever fickle, Gotham City public opinion begins to turn hostile towards the dynamic duo.  Gloating, the Joker schemes to take possession of a brand new ocean liner. The clown prince of crime kidnaps our "knocked out by gas" heroes, takes them to his hideout, and threatens to publicly behead them on TV unless he's given the ownership of the ship. But the supposedly unconscious duo have only been faking - leaping into action they surprise the Joker's gang, defeating the fiendish funnyman and his men in a fight.

Apart from providing some nice scenery for the Joker's hideout, and being a sounding board for his malevolent sense of humor, Queenie is an active participant in the cutthroat comedian's criminal activities. She invades the TV studio to gleefully take part in the Joker's "What's my crime" parody show. She also delivers the gas filled champagne bottle to Batman and Robin for the ship's christening, which is designed to knock the duo out so the gang can then kidnap them.

After the Joker and his men have been defeated in the fight with Batman and Robin, Queenie attempts to flee. She is pursued and grabbed by Batman. She then attempts to seduce the caped crusader to get out of her predicament. Batman ignores her come on;  he swiftly snaps the handcuffs on the now very miserable looking villainess.

Queenie is very much in the mould of the gangster's sexy, ruthless moll. She's a very bad girl alright, and some have suggested she could even a have been an arch villain herself in the series. However Queenie doesn't really come across as having the necessary smarts for this role - she's an enthusiastic master criminal's aid, rather than having what it takes to be a major arch criminal herself. Indeed, she comes across as extremely ignorant even for a blond bimbo: when the Joker describes his utility belt metaphorically as a magic lamp, she thinks he's being literal and starts rubbing the belt and making wishes. 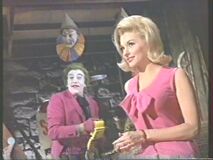 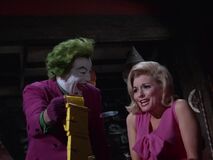 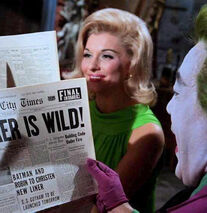 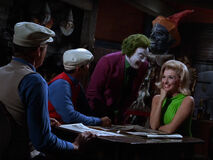 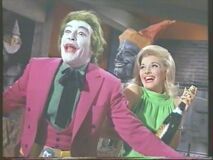 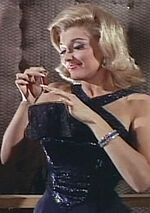 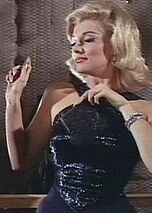 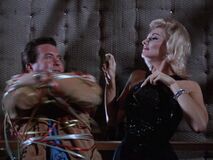 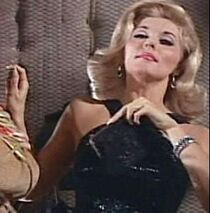 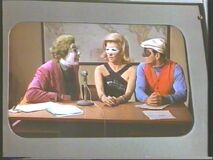 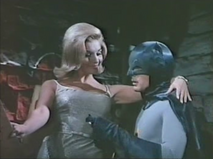 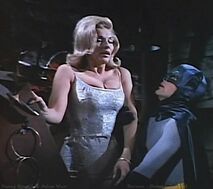 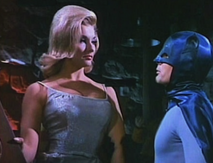 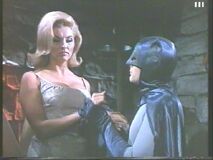 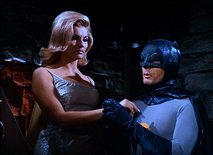 Add a photo to this gallery
Retrieved from "https://femalevillains.fandom.com/wiki/Queenie_(Batman)?oldid=172590"
Community content is available under CC-BY-SA unless otherwise noted.