Start a Wiki
watch 01:48
The Loop (TV)
Do you like this video?
The Queen of Zin is a sorceress in the Dungeons and Dragons animated series episode "The Garden Of Zinn".

Bobbi the youngest of the kids trapped in the Dungeons and Dragons Realm is poisoned after a bite from a dragon serpent. The only cure is from the plant from the Garden of Zin. To save Bobbi, Eric might need to marry the Queen of Zin to become King in a realm he hates so much.

In the end, Bobbi is cured and Eric is saved from marriage when the Queen of Zin monster-transformation spell on her brother backfires on her. Bobbi's sister Shelia is offered to become a new queen (by the Queen of Zin's brother, the new ruler) but she wisely and politely declines the offer. 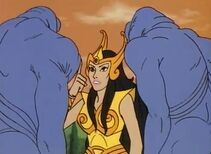 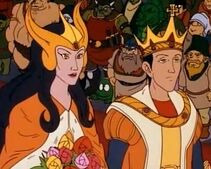 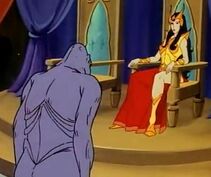 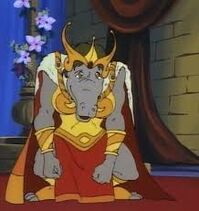 Other evil queens from this series include Dragon Queen Tiamat ("The Dragons Graveyard"); Lolth ("Hall of Bones"); and Demon Queen Syrith ("Child of the Stargazer").

Retrieved from "https://femalevillains.fandom.com/wiki/Queen_Zinn_(Dungeons_%26_Dragons)?oldid=189666"
Community content is available under CC-BY-SA unless otherwise noted.