Episode: ‘Vassa, Queen Of The Mermen’

To take over Atlantis (Failed)

Captured and, before her punishment, forced to pump the water out of the domed city
Queen Vassa is a villainess from the 1967 TV series Aquaman.

The menacing Queen of the Mermen, she has more than once tried to take over the kingdom of Atlantis. She is a tall woman with green skin and a fish tail. Despite being a sea monster, she is very attractive, despite in a menacing way.

Vassa’s first appearance was in the episode, ’Vassa, Queen of the mermen.’ She seems to have a lot of history with Aquaman, as he recognises her and seems to know of her villainy. In this episode she plans to take over Antlantis by (rather comically) using robotic whales equipped with lasers to destroy the dome surrounding Atlantis. Vassa soon spots Mera swimming along, and sends the mermen inside the robotic whale to attack her. Mera calls for help and Aquaman and Aqualad appear. However, Mera is swallowed up by the robot whale. As Aquaman and Aqualad fight of the robots, Vassa goes ever-onward to the city.

Later, Vassa gets to the dome and begins zapping it with the lasers. Then Aquaman and Aqualad appear, so she sends the whales to laser them. However, defeat the whales and send Vassa’s ship she is lying on top of crashing into the dome. A humiliated Vassa is then caught by Aquaman, who then sends her back to her land.

Vassa next appears in the episode, ‘the trio of terror.’ The manipulative queen partners up with fellow enemies Brain and Black Manta to destroy Aquaman once and for all. First, the fishy beauty sends missiles to attack the duo. However, they blow up as soon as somebody touches it. Aqualad tries to steer the missile away and is promptly knocked out by the ensuing explosion. Before he can be carried back to the gloating Queen and her cohorts, however, Aquaman rescues him.

Later, Vassa, Black Manta and Brain are waiting for Aquaman and Aqualad to appear, having thought of a plan to capture and kill them. Catching the do-gooders in sight, Brain sends knock-out lasers at Aquaman, effectively capturing him. However, Aquaman escapes, and Black Manta blows up Brain’s ship, seemingly killing him. A panicking Vassa then blows up Black Manta’s ship, seemingly killing him also. She then makes her triumphant escape as Aquaman and Aqualad look on.

Queen Vassa’s final appearance is in ‘The vicious villainy of Vassa.’ In this episode, the crafty schemer uses an updated (and much cooler-looking ship than the whale) ship to send fireballs into the dome. This then floods the city of Atlantis, which apparently is in an airtight container. Aquaman then hears a signal of danger, however, and he and aqualad then attack her ships.

Then Mera, reflecting the air headed sexist view of women in the 60’s, goes to help Aquaman, and is promptly captured by the evil mermaid. Then Vassa tries her evil scheme to destroy Aquaman, but Mera manages to stop her. A furious Vassa then ties the beauty to a pole.

Aquaman and Aqualad soon storm in to rescue Mera and orders Vassa to free her, even threatening violence to the Queen. The cowardly Mer-Queen frees Mera and is promptly taken prisoner by Aquaman and Aqualad, this being the only time she gets a proper come-uppance. Taking the captured Vassa back to Atlantis, Aquaman and the rest of Atlantis’ subjects decide that before her imprisonment Vassa should pump all the water out of the city, a humiliating defeat for a wicked villainess. 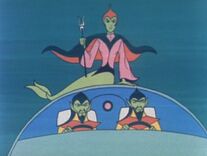 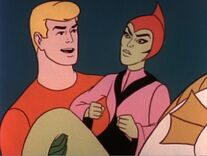 Add a photo to this gallery
Retrieved from "https://femalevillains.fandom.com/wiki/Queen_Vassa_(Aquaman)?oldid=185231"
Community content is available under CC-BY-SA unless otherwise noted.