Start a Wiki
watch 01:38
The Loop (TV)
Do you like this video?
Queen Smedes (Chelo Alonso) is the primary antagonist of the 1960 adventure drama film "Maciste nella valle dei Re" (aka. "Son of Samson").

A Persian ruler, she has women abducted and sells them as slaves.  One of these is the beautiful Nofret (Federica Ranchi). When her husband, Pharaoh Armiteo I (Carib Tamberlani), finds out what she has been doing behind his back and reprimands her for her behavior, she has him secretly killed. She then controls the new successor, Pharaoh Kenamun (Angelo Zanolli) by using an evil necklace.  She drugs him with a substance that loses his will-power.

Maciste (Mark Forest), the son of Samson, unites people to rise up against her tyranny.  Smedes uses a sultry dance to attempt to seduce Maciste.

Once surrounded, she has the last laugh (literally), boasting that they will never execute her, and then throws herself to the crocodile pit in her secret chamber along the Nile River to avoid justice.

The name Samson appears in the title but this has no relationship to the biblical Samson.

Glancing over, stealthily giving the signal to the assassin...

Encouraging the new pharaoh to schedule the marriage quickly...

Commanding her right hand to hunt down the man called Maciste.

She wears many outfits throughout the film. 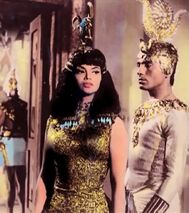 Attempting to seduce our hero. 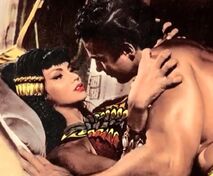 Moments before her death, laughing. "You won't put me to the fire". 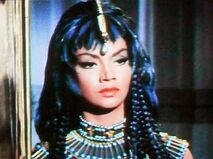 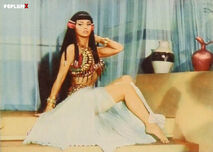 Add a photo to this gallery
Retrieved from "https://femalevillains.fandom.com/wiki/Queen_Smedes_(Son_of_Samson)?oldid=160821"
Community content is available under CC-BY-SA unless otherwise noted.