Queen Ravenna (Charlize Theron) also known as 'The Evil Queen' or simply 'The Queen', is the primary antagonist in the 2012 fantasy movie Snow White and the Huntsman and reprised her role in the 2016 prequel and sequel The Huntsman: Winter's War.

Snow White and the Huntsman

Queen Ravenna was the daughter of an unknown sorceress whose home village was ravaged by a peasant king and found her way to the dark side by using unholy magic that her mother also practiced.  She was the sister of Finn (Sam Spruell) and Freya, the widow of King Magnus (Noah Huntley) and the evil stepmother of Princess Snow White (Kristen Stewart).

At a young age, she was abducted by a vicious master.  She used her beauty to seize multiple kingdoms.

Her mother had given her a special enchantment to protect her from time.  She was regarded as being the "Fairest of Them all".  However, she was forced to devour the life-force of young maidens to keep that title.

To become truly immortal Ravenna is told that she must consume the heart of Snow White the moment she becomes fairest in the land.

After the death of Snow White's mother, Queen Eleanor, her father, the Queen Eleanor's widowed husband, King Magnus, became inconsolable.  He was defeated an invading Dark Army of glass soldiers, and rescued a woman held captive from the Dark Army, who reveals her name to be Ravenna.  King Magnus is so enchanted with her beauty of Ravenna, that his broken heart is forgotten and he plans on marrying her the next day.

Just before the couple was about to consummate their marriage, Queen Ravenna, killed King Magnus and took over his kingdom.

Snow White's childhood friend William (Sam Claflin) and his father Duke Hammond (Vincent Regan) escape the castle, but an unable to rescue her.  Snow White is captured by her evil stepmother, Queen Ravenna's brother Finn, and locked away in the north tower of the castle for many years.

Queen Ravenna makes a bargain with Eric the Huntsman (Chris Hemsworth), a widower and drunkard, to capture her stepdaughter Snow White, promising to bring his wife back to life in exchange.

The Huntsman tracks down Snow White, but when Finn reveals that Queen Ravenna does not actually have the power to do what she promised, the Huntsman fights him and his men while Snow White runs away.  When the Huntsman catches up with her, she promises him gold if he will escort her to Duke Hammond's castle.  Meanwhile Finn, gathers another band of men to find her, and Duke Hammond and his son William learn that she is alive.  William leaves the castle on his own to find her, joining Finn's band as a bowman.

After Finn is killed, Queen Ravenna shape-shifts transformed as William and tempts her stepdaughter Snow White into eating a poisoned and red apple.  When William discovers her and believes she is dead, he takes her to Hammond's castle.  As she lies in repose, the Huntsman professes his regret for not saving Snow White, who reminds him of his wife.  He kisses her, breaking the spell.  Snow White awakens and walks into the courtyard, and rallies the Duke's army to mount a siege against her evil stepmother, Queen Ravenna.

The dwarves infiltrate the castle through the sewers and open the gates, allowing the Duke's army inside. Queen Ravenna is confronted, and conjures a rain of glass shards to kill them.  This creates indestructilbe glass monsters from it after it fails.  While the Duke's army is keeping the monsters at bay, Snow White battles her evil stepmother, Queen Ravenna, but is overpowered.  Queen Ravenna is about to kill her stepdaughter Snow White and consume her heart.  Fortunately, she faced her downfall when Snow White stabbed her heart for what she did to her fatehr for tyrannizing and killing her people within the land.

Evil sorceress Queen Ravena's powers allow her to know that her younger sister Freya (Emily Blunt), whose powers have not emerged, is not only engaged in an illicit affair with nobleman Andrew (Collin Morgan), but is also pregnant with his child.

After Freya gives birth to a baby girl, Freya discovers that Andrew murdered their child and, in a grief-fueled rage, Fraya kills him with her sudden emergence of ice powers.

Freya abandons the kingdom and builds herself a new kingdom, ruling as the Ice Queen.  Freya orders children to be abducted so they can be trained to avoid the pain of love, and to be an army of fearsome huntsmen to conquer for her.

Despite the training, two of the best huntsmen, Eric (Chris Hemsworth) and Sara (Jessica Chastain), grow up and fall in love, secretly marry, and plan to escape together.  Freya discovers their secret, and creates a massive ice wall to separate them, then casts Eric out of her kingdom after forcing him to watch as Sara is killed by their fellow huntsmen.

Because of its dark magic, she ordered it to be taken to sanctuary, the magical place that sheltered Snow White during the events leading to Ravenna's death, so the mirror's magic could forever be contained.  Snow White's husband, William, informs Eric that the soldiers tasked with carrying the Mirror went missing while en route to the Sanctuary.    Eric takes off to find the mirror, and is attacked by Freya's huntsmen.

However, he is rescued by Sara, who reveals that she was imprisoned by Freya the entire time, only to have just recently escaped.

The two join forces to retrieve the mirror.  They are then ambushed by Freya and her huntsmen.

Freya then reveals that Sara has been loyal to her all along.  Sara then shot an arrow into Eric's chest on Freya's order, killing him.  Freya departs with the Magic Mirror, but she is unaware that Sara intentionally missed so that Eric could live.  Back in her palace, Freya recites the iconic verse associated with the Mirror, resurrecting Ravenna, who became one with the Mirror whsn Snow White vanquished her.  Boasting a new suite of powers thanks to the Mirror, Ravenna usurps Freya's rule by coordinating Freya's huntsmen and army to reclaim the kingdoms Snow White liberated.

Eric infiltrates the ice palace,  He attempts to assassinate Freya, but is stopped by Ravenna.

When Freya realizes that Sara did not actually kill Eric, she reluctantly sentences them both to death because of Ravenna's manipulation.  However, Eric is able to convince a few huntsmen to rebel, claiming the love of brethren.  Ravenna begins to kill the huntsmen.  Freya, realizing that she regards the huntsmen as her "children", protects them with an ice wall, separating the huntsmen from the sisters.  As Eric, Sara and the rebelling huntsmen climb over the wall to fight Ravenna and Freya, the two sisters argue over the icy kingdom.   Freya forces Ravenna to reveal that she ultimately caused the death of Freya's child so she could remain the fairest of them all.  This forced Freya to finally turn against her sister.  Freya was impaled by Ravenna, and as she was dying from her wounds, she smiled at the sight of a vision of her old loving self, and gladly winesses Eric and Sara together.

With Freya's death, those who had been imprisoned by Freya's magic are set free, while a mysterious golden bird flies overhead.  Eric, Sara and the huntsmen look forward to a new future while the dwarves pair off romantically and Eric and Sara share a kiss. 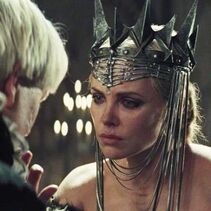 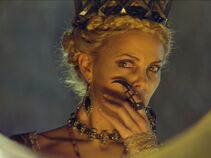 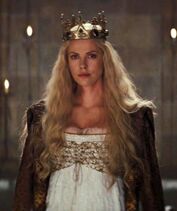 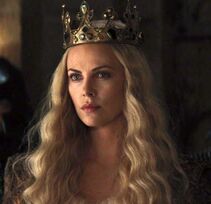 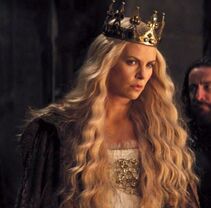 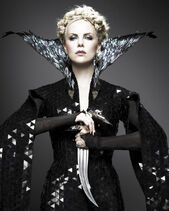 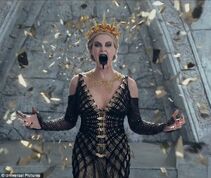 Add a photo to this gallery
Retrieved from "https://femalevillains.fandom.com/wiki/Queen_Ravenna_(Snow_White_%26_The_Huntsman)?oldid=205360"
Community content is available under CC-BY-SA unless otherwise noted.