Start a Wiki
watch 01:51
The Loop (TV)
Do you like this video?
Queen Procrusta is the villainess from the 1947 episode "Death of the Fanged Lady" for the comic book Jo-Jo Comics #9.

Queen Procrusta was a dazzeling beauty with a heart of ice.  She developed a death machine to torture and kill her enemies.

Jo-Jo The Congo King and his lady friend Tanee traveled to Mazur, where Queen Procrusta ruled.  Once there, he was told by the natives to guard his lady well, since Procrusta is jealous of beauty.

Both Tanee was captured and taken to Procrusta's castle.  Tanee was placed in a cage and elevated high over the ground by use of a rope.

Later, Procrusta had Tanee placed on the ground and each of her four extremities tied to the end of a horse.  The horses were ordered to stretch Tanee.

Jo-Jo broke into Procrusta's lair and cut the ropes binding Tanee.  Procrusta took Tanee hostage with a dagger.  However, Jo-Jo threw his own knife, which landed in the neck of one of the horses.  The horse bucked in the air, and his hoof kicked Procrusta in the head, killing her. 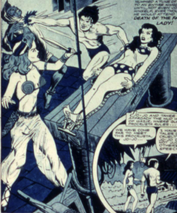 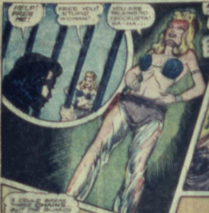 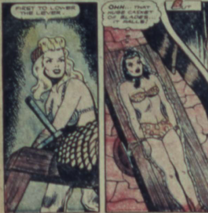 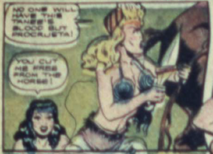 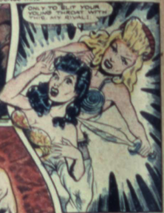 Add a photo to this gallery
Retrieved from "https://femalevillains.fandom.com/wiki/Queen_Procrusta_(Jo-Jo_Comics)?oldid=195797"
Community content is available under CC-BY-SA unless otherwise noted.