The Female Villains Wiki
Register
Don't have an account?
Sign In
in: 1940s, Attempted Murder, Barefoot,
and 13 more

Queen Nisaba is a villainess from Zoot Comics #11. She appears in the Rulah, Jungle Goddess story The Slumbering City.

Rulah and her child companion Tombo discover a lost city sealed by a stone gate. The city and its inhabitants have remained dead for 5000 years. But as Rulah and Tombo enter the city, they bring with them air from the outside, which seems to revive everything in the city to how it was before.

Queen Nisaba awakens and is ready to continue her plot of killing her husband, the King, and ruling with her lover Khani. Rulah and Tombo are seized by Khani and are to be executed because Rulah bares a resemblance to Queen Nisaba, and he believes Rulah is impersonating her.

Later the evil queen is being carried into the city by her servants when she hears the executions taking place, she orders her servants to take her there quickly to watch as she takes pleasure in seeing people executed. She watches for a while but grows bored of the snake taking its time to kill Rulah and Tombo and cuts the rope holding back the snake so she can enjoy the execution.

But her husband the King has learnt of her intentions to kill him and sends guards to kill Queen Nisaba and Khani. Nisaba tries to flee but gets attacked by the snake she herself had released. She eventually dies, either from the snake or from the city and its people eventually decaying soon afterwards.

The evil queen is also a sadist, and wants to enjoy the sight of an executon

Her plot to kill the King has been discovered 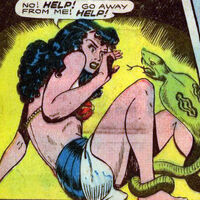 As she tries to escape she is attacked by the snake she cut free
Community content is available under CC-BY-SA unless otherwise noted.