Queen Narissa (Susan Sarandon) is the main villainess of the 2007 film Enchanted.

Narissa was the wicked, murderous, vain, selfish, stern, wrathful, ruthless, and manipulative Queen of fantasy world Andalasia and the stepmother of Prince Edward. She did everything in her power to keep Edward from being married, not wanting to lose her throne and the power it gave her, having her henchman Nathaniel distract the prince's quest to find true love. But eventually, Edward met and fell in love with the equally love-struck Giselle and the two made plans to marry, angering Narissa. To prevent the marriage, Narissa used her powers to disguise herself as an elderly woman before luring Giselle to a fountain on the day of the wedding, telling her it granted wishes. When Giselle leaned forward to make her wish, the evil Narissa shoved Giselle into the fountain, telling Nathaniel that it was going to take her to "a place where there were no happily ever afters".

The fountain brought Giselle to New York City, where she met and stayed with single dad Robert Philip and his young daughter Morgan. When Edward went to save Giselle, Narissa sent Nathaniel after him, later using her powers to contact her minion through water surfaces. Through that form of communication, the nefarious villainess gave Nathaniel three poisoned apples to use to kill Giselle, thus eliminating her as a threat permanently. When Nathaniel's first two attempts to kill Giselle failed, Narissa berated her loyal minion before deciding to come to New York herself to finish Giselle off. Once she arrived, she found Nathaniel and took him to the ball, where Giselle had gone with Edward along with Robert and his girlfriend Nancy Tremaine. Once again using her elderly disguise, Narissa goaded Giselle into taking a bite of her last poisoned apple, saying it would make her forget about coming to New York and having gradually fallen in love with Robert. Once she took a bite, Giselle collapsed and Narissa attempted to escape with her incapacitated victim in the elevator. But she was stopped by Edward, who came to realize Narissa's true personality when Nathaniel confessed to what they had done. When Edward told her that he would have her dethroned when they returned to Andalasia, the evil Narissa prepared to use her powers on her stepson before Nathaniel stopped her, putting a sword to her throat. Despite this, Narissa laughed at the heroes, believing there was no way they could save Giselle in time.

After Robert was able to revive Giselle with a true love's kiss, the angered Narissa briefly threatened everyone with a sword before transforming into a dragon. After announcing her plan to kill everyone and make it appear that she were the only survivor once she returned home, Narissa tried to grab Giselle and instead grabbed Robert when he stepped up to protect her, carrying him up the building with Giselle in pursuit. When Narissa reached the top, she began to boast about her "victory", cackling evilly as she did. With the help of her chipmunk friend Pip, though, Narissa was defeated when she fell off the tower building. Before she could finish a spell to save herself, Narissa hit another building top, which caused her to burst into flames before hitting the street below and evaporating into blue sparkles. 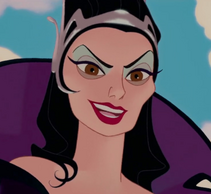 Queen Narissa in her animated form

Queen Narissa disguised as a hag

Narissa shoving Giselle down the fountain

Narissa in her disguise again, this time giving Giselle a "wishing" apple 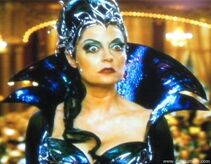 ....into a veracious dragon

Narissa is defeated, though....

....and sent plummeting to her doom 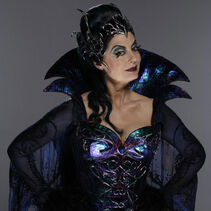 Add a photo to this gallery
Retrieved from "https://femalevillains.fandom.com/wiki/Queen_Narissa_(Enchanted)?oldid=187405"
Community content is available under CC-BY-SA unless otherwise noted.