Queen Kari (Martine Beswick) is an evil amazon queen in the 1967 movie Prehistoric Women which is also known as Slave Girls.

After British explorer David Merchant (Michael Latimore) touched the great white Rhino's horn, he gets transported to a parallel prehistoric world where the men, and the female blondes are enslaved to a tribe of gorgeous brunettes, lead by the cruel tyrant Kari.

Kari and her warriors capture David and accuse him of disturbing the spirit of the white rhinoceros. They take him to the temple and is about to be killed for his trespassing when a flash of lightning opens a giant crack in the cave wall when David touches the horn of the rhino. He escapes into the jungle and encounters a fair haired beauty, Saria (Edina Ronay). Saria is a member of a tribe of blonde women who have been enslaved by their cruel mistresses, the dark haired warriors led by Queen Kari.

Queen Kari wore a variety of skimpy leather outfits, similar to the bikini outfit that the actress Martine Beswick wore in the 1966 movie One Million Years B.C. as the sexy cave girl Nupondi. Here in the film, Beswick was the evil rival of Raquel Welch, who she engaged in the famous catfight. The leather bikini sometimes had metal studs around the outside, and she also wore a fur cape. Kari also had a crown made of ivory tusks.

David and Saria are recaptured, and Kari decides she wants David as her mate. However, he is appalled by her cruelty and does not succumb to her desires or advances. In addition, he is smitten by Saria, and wants nothing to do with the gorgeous evil Kari. When he refuses her, he is thrown into the dungeon.

Saria convinces him to accept Kari's proposal, then capture her, and lead the rebels. But somehow, his plan fails, and they are to be sacrificed. When one of the blonde slave girls, Amyak (Stephanie Randall) objects to the way they are treated, Queen Kari backs her into the pointed edge of the spit of the campfire, killing the slave girl. Kari then harshly orders the rest of the slaves to continue dancing in spite of their protest.

Saria is chosen to be the next sacrifice to the spirit of the rhino. At this, David frees himself from his chains and the rest of the slaves begin to revolt. David and Kari get into a fight, and Kari is knocked out. He then frees Saria. Kari summons the white rhino god, who the tribe worships. In the course of the battle, Kari gets impaled on the white Rhino's horn. The blonde amazons are free from her reign of terror, and David Merchant gets back to his world.

Kari, queen of the amazons

One the slaves dared to defy her authority. This deserves a strong example. 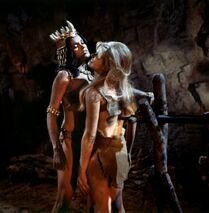 Killing one of her slaves

Thrown at her feet

The slaves are ready for the sacrificial ceremony

Catfight between Saria and Kari 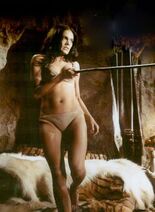 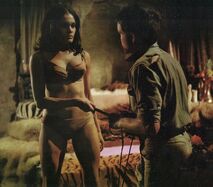 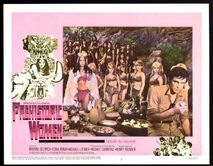 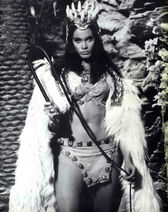 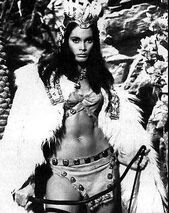 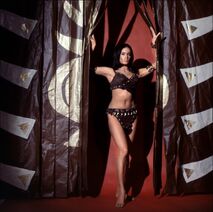 a promo photo
Add a photo to this gallery
Retrieved from "https://femalevillains.fandom.com/wiki/Queen_Kari_(Prehistoric_Women)?oldid=148531"
Community content is available under CC-BY-SA unless otherwise noted.