The Female Villains Wiki
Register
Don't have an account?
Sign In
Advertisement
in: 1980s, Brunette, Callous,
and 21 more 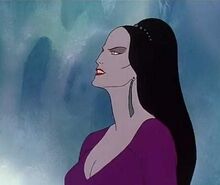 Queen Juliana (Susan Tyrell) is the secondary antagonist in the 1983 adult animated movie Fire and Ice. She is the sexy and very calm yet twisted, remorseless, and very wicked mother of Count Nekron. Despite her age, she is very youthful-looking as she is skilled in the magic arts.

Juliana gave birth to Nekron and versed him in the arts of magic. Together they overthrew Icepeak. He grew up to be a sadistic enemy of the fire keep. Juliana and her son create a massive glacier which destroys much of the land, including the hero Larn’s village. She later sends a message to the Fire Keep demanding her needs.

Secretly, so her deranged son can have a bride, Juliana organises the kidnap of Princess Teekra. When Teekra temporarily escapes, an enraged Juliana orders the death of Captain Humanus.

When Teekra is eventually kidnapped, Juliana is seen as her captor on a boat sailing for the villain’s castle.

When Juliana presents the Teekra to her son, he is repulsed by her kind heart and refuses to mate with her (for more than one reason). He holds her hostage, while his mother is visibly irritated by his less-than-pleased reaction to her gift.

Later, when the castle is under siege, Juliana is seen terrified as parts of it start to crumble. Teekra manages to use her reaction to escape. However, Juliana comes up behind the princess and muffles her cries. Teekra struggles and escapes from the wicked queen’s hold and runs off, leaving her behind.

Later, when Darkwolf and Nekron battle, Juliana comes up onto the roof. She screams and wails when she sees her beloved son perish. Later, when the Fire people send lava splashing onto the glacier and the palace inside, the palace starts to crumble. Juliana, still mourning her wicked son, perishes and falls into the lava as the floor beneath her feet crumbles. 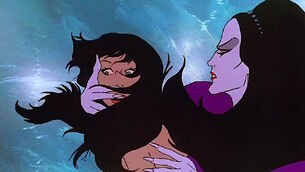