The Queen is a Snow White inspired antagonist in the 2013 hidden object game Living Legends: Frozen Beauty. She was a queen of an unknown kingdom where the protagonist of the game and her younger sister Elizabeth lived in.

The game is at once an alternative take on and a sequel to the Snow White fairy tale, set after the evil Queen successfully killed Snow White and has turned into an Ice Queen-type character. Many decades before, the Queen was at war with Snow White, her stepdaughter and crown princess of the kingdom, and her friends and allies the Gnomes. In order to win the battle, she entered a contract with the Alchemist: the Alchemist would grow a Magic Apple Tree whose fruit allows the Queen to drain youth from her victim, but she mustn't eat the fruit when she herself is currently the fairest one of all or else the spell would backfire on her and destroy her, something that the Queen wasn't too pleased with but agree, and once she succeeded in her goal, the Queen would return the Alchemist a favor by retrieving the mystical Flower of Life hidden by the Gnomes inside the maze that only the fairest one of all can enter.

Though she had succeeded in her goal of tricking Snow White into eating the apple, frozen the Gnomes to death, and becoming the fairest one of all, her victory was short-lived as she began to show sign of age. Realizing that simply being the fairest of all wasn't enough, the Queen changed her goal to become the fairest for all eternity. For this end, she began to lure many of the fair maidens to her castle by offering them a chance of becoming her successor, providing that they had proved themselves to be worthy of the position by entering a contest sponsored by her. However, all the maidens met their untimely end when she tricked them into biting the Magic Apple, drained them of their youth, frozen them to death, and sealed their souls inside their frozen corpses, one of such the maidens being the protagonist and Elizabeth's mother, who was driven to accept the villainess' ordeal due to the need to provide for the protagonist and Elizabeth. Though the Queen was quite content with the absorbed youth after she killed the protagonist's mother, she still needed two more victims (seven in total) in order for her ultimate goal to come true, and setting her eyes on the young protagonist and Elizabeth whom she knew will grow up into young ladies equaled in beauties that surpassed even their mother.

Believing that she was now almost unstoppable, the Queen teleported the now freezing Elizabeth to her and the Alchemist's secret chamber under the tower in her castle and headed off to find her last remaining apples to be used on the protagonist. Unknown to the Queen, the protagonist received a help from the spirits of three fair maidens which allowed her to reach the castle, had learned about the secret of her Magic Mirror from the spirit of her mother which allowed her to locate Elizabeth before she destroyed it, and had discovered the Queen's greatest weakness in her contract with the Alchemist. After the protagonist arrived to her secret chamber and prepared a piece of paper that containing her "last wish", the unsuspecting villainess arrived and chained her up with an icicle chains. The Queen then offered one of her Magic Apple to the protagonist and told her to bite it, so that she could drain the protagonist youth and finally finished what she had started. Unfortunately for the villainess, the protagonist's last wish was "I wish the Queen was the fairest one of all" which was granted by the Alchemist (who had became tired of the Queen's charade), causing the spell to backfire one her and rapidly age her to dust, freeing the land from the her iron grip once and for all. With the Queen's defeat, the curse upon Elizabeth was broken, reuniting the sisters. 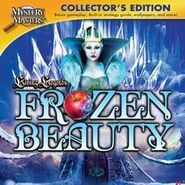 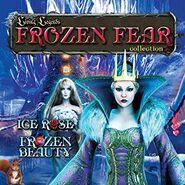 The protagonist's mother, frozen to death by the Queen.

Backstory in the Queen's diary, revealing her as the killer of the protagonist's mother

The Queen on a throne with her victims

Statues of the Queen and her six victims

The Queen's villainous reveal to the protagonist

Obstructing the protagonist with her dark magic

Defeated by the protagonist

Referenced in Living Legends: Wrath of the Beast

Add a photo to this gallery
Retrieved from "https://femalevillains.fandom.com/wiki/Queen_(Living_Legends:_Frozen_Beauty)?oldid=196330"
Community content is available under CC-BY-SA unless otherwise noted.