Punk Girl and Rival are enemies in the 1988 ZX Spectrum action side-scroller "Sabrina"; a game based around pop star Sabrina Salerno that was developed by Iber Soft.

One of several regular enemies in the game who roam the city and attempt to attack Sabrina. 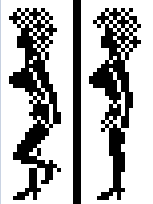 The rival is the final (and only) boss in the game. The game is complete when Sabrina wins a catfight with her. Though her identity is unknown, it is speculated that the developers intended it to be Samantha Fox.
Retrieved from "https://femalevillains.fandom.com/wiki/Punk_Girl_and_Rival_(Sabrina)?oldid=72408"
Community content is available under CC-BY-SA unless otherwise noted.