Psylocke (Mei Melançon) was a supporting antagonist featured in the 2006 superhero film X-Men: The Last Stand. She was a mutant with the ability of shadow teleportation. She was a member of the Omegas, a mutant organization that protested against a cure designed to remove mutants of their abilities. She later became a member of the Brotherhood of Mutants, a mutant terrorist organization that fought for mutant supremacy, when Magneto recruited Omega members into his organization. She participated in a large scale battle on Alcatraz Island where she and her teammates attempted to kill Warren Worthington II, the man responsible for creating the mutant cure. They failed when Warren was saved by his son Warren Worthington III/Angel. She was later killed when Jean Grey destroyed the Worthington Laboratory on the island using a disintegration wave that completely obliterated Psylocke when she tried to escape the building. Her body was reduced to ash.

Psylocke had black hair with purple stripes. On the right side of her neck was a tattoo of the Omega signal.

Her attire included a brown tank top strapped together with a brown leather corset. She wore dark cargo pants with a waist belt. On her left arm she wore a bracelet while on her right arm she wore a leather strap covering half of her arm. Around her neck, she wore a black necklace. In her second appearance in the film, she wore a dark jacket over her tank top.

Psylocke's first appearance in the film.

"They want to exterminate us!"

Psylocke and her teammates noticing Magneto.

"Going somewhere?" - Psylocke ambusing Worthington II and his head scientist when the pair attempt to escape.

Psylocke's second appearance in the film.

Psylocke attempting to flee the building with her teammates moments before her death.

Psylocke with Callisto and Arclight. 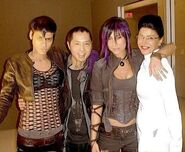 Mei Melançon as Psylocke with her fellow castmates.

Retrieved from "https://femalevillains.fandom.com/wiki/Psylocke_(X-Men:_The_Last_Stand)?oldid=183445"
Community content is available under CC-BY-SA unless otherwise noted.