Suzana is fake and mean to children. The nice teacher, Helena is her worst enemy and is very jealous of her especially when it comes to René. She often conspires against her and tries to get the head teacher involved to make her life hard. The students all quickly realise that she's not a nice person, Valeria was the first to as Suzana always over exagerated to be good infront of her.

Alot of Suzanas plans fail and she becomes the victim of pranks from the students. Including being knocked out by a soccer ball on a couple of occasions. She is ultimately fired due to her cruelty and unprofessionalism. On her final exit the students throw paper at her and then she treads in dog poo where she then throws a tantrum humiliated. It is not known what happened to her after. 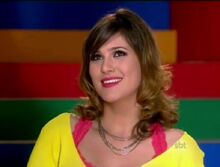 Add a photo to this gallery
Retrieved from "https://femalevillains.fandom.com/wiki/Professora_Suzana_(Carrossel)?oldid=203517"
Community content is available under CC-BY-SA unless otherwise noted.