Professor Salasar (Laraine Newman) is the villainess of "Trading Chases", episode 1.06 of Be Cool, Scooby Doo! (airdate October 12, 2015). She was an egyptologist who worked at a history museum alongside her rival, Professor Hess, whom she often argued with over their differing theories on Egyptian history.

When the museum began being plagued by the Egyptian god Sobek, Professor Hess claimed that the god was trying to protect its' sarcophagus, which contained a solid gold statue, and that Professor Salasar was preparing to open it when the attacks began. Salasar fiercely denied Hess's claims, fiercely stating that the sarcophagus was empty.

But later on, the Scooby Gang (aided by tour guide Jeff and a group of children he had been giving a tour to) were able to lure "Sobek" into a trap, using Scooby and Shaggy as bait before tying him up and trapping him in a sarcophagus. The tied up villain was finally unmasked as Professor Salasar. Salasar had indeed been wanting to steal the gold statute in Sobek's tomb, and began dressing as the ancient god to scare away visitors so she could make off with the statute and leave her career in egyptology. Professor Salasar was promptly arrested. 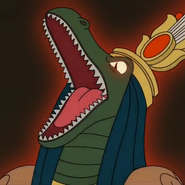 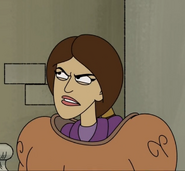 Professor Salasar unmasked
Add a photo to this gallery
Retrieved from "https://femalevillains.fandom.com/wiki/Professor_Salasar_(Be_Cool,_Scooby_Doo!)?oldid=142088"
Community content is available under CC-BY-SA unless otherwise noted.