Start a Wiki
watch 01:51
The Loop (TV)
Do you like this video?
Professor MacDougal (Miriam Flynn) was the main villainess from "Werewolves of Dunneglen," the 11th episode of Mighty Max. She was an evil professor who was secretly using her lab to process the essence of werewolves, doing so in an attempt to become immortal. MacDougal used the essence to create a potion, which she revealed and brandished to Max as well as Cameron, a member of a Scottish werewolf pack, shortly before she drank the concoction.

At that moment, the evil MacDougal transformed into a werewolf, prompting Cameron to transform and fight against the villainous madwoman. The remainder of Cameron's pack also went after MacDougal, who fought off all of them one by one. It was at that point that Max decided to blow up the lab; activating the hydrogen tanks and then using the adjustable ceiling to trap the villainess. After Max, Cameron, and the rest of the pack escaped, the hydrogen and the sparks from MacDougal's machines caused the lab to explode, killing MacDougal. 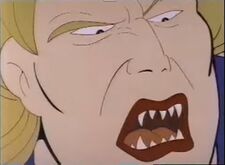 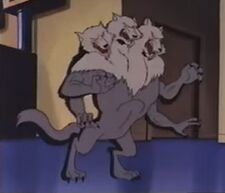 Add a photo to this gallery
Retrieved from "https://femalevillains.fandom.com/wiki/Professor_MacDougal_(Mighty_Max)?oldid=160684"
Community content is available under CC-BY-SA unless otherwise noted.