Start a Wiki
watch 01:51
The Loop (TV)
Do you like this video?
Priscilla (Jaime Pressly) is one of the antagonists in the 2001 teen comedy film Not Another Teen Movie.

Jake attempts to court Janey, who has been transformed into a drop dead gorgeous girl. Priscilla is obviously jealous of this, and because of it, she feels threatened by Janey.

There are several incidents where Priscilla attempts to bully Janey and make fun of her. While at a pool party, Priscilla pours a bottle of water down the front end of her dress, which brings Janey to tears and totally humiliated.

At the prom, everyone believes that the prom queen will be between Janey and Priscilla. However, they are shocked to find that the Fratelli conjoined twins are awarded the title.

During the traditional prom king and queen dance, Janey supposedly left with Austin to go to a hotel. Jake shows up to the hotel room only to find Austin having wild sex with a girl, but is shocked to find that it is Priscilla fully clothed and only pretending. Jake coldly punches Austin and Priscilla, knocking them unconscious for their part in Janey's humiliation. 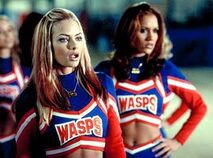 Add a photo to this gallery
Retrieved from "https://femalevillains.fandom.com/wiki/Priscilla_(Not_Another_Teen_Movie)?oldid=170927"
Community content is available under CC-BY-SA unless otherwise noted.