Princess Cleopatra (Jane Elliot) was the secondary antagonist in the 1976 two-part episode "The Pharaoh" and "Return of the Pharaoh" for the TV series "Electra Woman and Dyna Girl".

Princess Cleopatra is the sidekick of The Pharaoh (Peter Mark Richman), who is attempting to get his hands on the sacred Coptic Eye.  The Coptic Eye has been buried deep in the main chamber of King Tut's pyramid in Egypt for thousands of years, until the entrepreneur Mr. McLintock (Sterling Swanson) has recently spent billions of dollars to have the entire pyramid brought, stone by stone to create a tourist attraction.  However, due to an ancient curse, the tourists stopped coming, and Mr. McLintock has planned on sealing up the pyramid forever.

Frank Heflin (Norman Alden), tells Electra Woman (Deirdre Hall) and Dyna Girl (Judy Strangis) that the Pharaoh has been detected in the area.  Just then, Cleopatra comes over the Crime Scope monitor and tells them of the Pharaoh's plan to steal the Coptic Eye.  It's a trap of course, but the heroines decide to take it.  Once inside the pyramid, they are trapped when a 20-ton rock slab seals the opening.  As the rock descends slowly upon them, Frank helps to direct their full energy of the Electra-beams and pushes the rock back up.

In the second part, Frank cuts off the power to Electra Woman.  However, the Pharaoh uses his staff to immobilize them both with a mummyfying spray.  Frank then sent sonic vibrations to shatter the mymmyfying spray.

Meanwhile, the Pharaoh set an 18-ton rock to seal off the main chamber "for all eternity".  Dyna Girl shook Electra Woman, snapping her out of her hypnotic trance, and the Dynamic Duo Electra-degravitated away from the snakes.

The villains then got lost in the maze with all the passageways, and stupidly wound up back in the main chamber with the heroines.  The 18-ton rock trapped all 4 of them.  All power to the Electra0comps was blocked and they were running out of air.  Therefore, they needed to work together.

The Pharaoh read the hieroglyptics on the wall, and it revealed that if they pulled a lever high above the floor, a ceiling panel would open.  If they did so, sunlight would hit a certain spot on the wall, opening a secret door.  Lori then gave Judy a boost, and Judy flipped up high enough to pul the lever.  No door opened, but it did allow the power source from Electra Base to reactivate their Elecra0comps.  They then used the new Electra-Vision to saturate the walls with light.  A secret door opened.

The treacherous Pharaoh double-crossed the heroines, and he hypnotized them with his Coptic Eye, while he and Cleopatra escaped.

Electra Woman and Dyna Girl seemed to be caught in a huge earthquake, and large stones began to fall all around them, as if the pyramid were caving in on them.  However, the Crime Scope revealed that the earthquake was an illusion.  Frank told them not to trust their eyes, and he guided them out to safety.

Tracking The Pharaoh and Cleopatra down to their lair, they were nearly hypnotized by the Coptic Eye once again.  However, the heroines used the Electra-Vision, and the thypnotic rays were reflected back at the Pharaoh.  The villains got sent to prison for a long time. 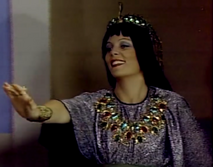 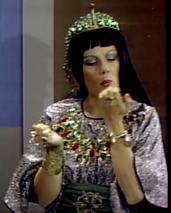 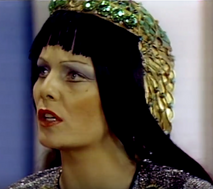 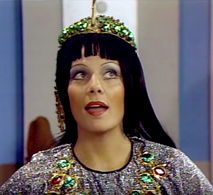 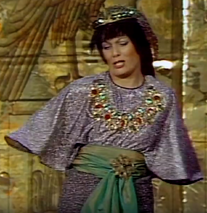 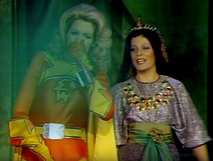 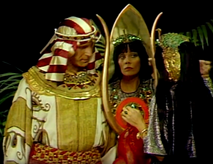 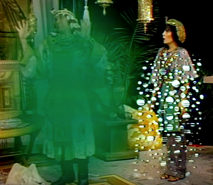 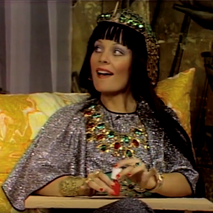 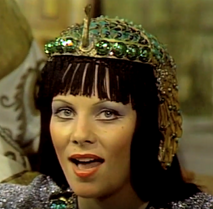 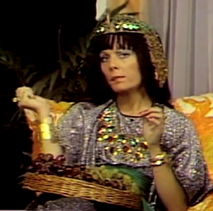 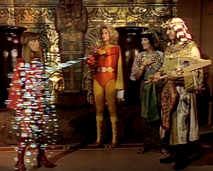 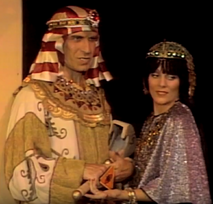 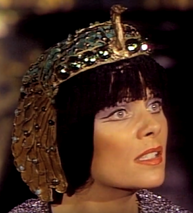 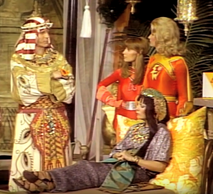 Add a photo to this gallery
Retrieved from "https://femalevillains.fandom.com/wiki/Princess_Cleopatra_(Electra_Woman_and_Dyna_Girl)?oldid=116961"
Community content is available under CC-BY-SA unless otherwise noted.