Start a Wiki
watch 01:51
The Loop (TV)
Do you like this video?
Priestess Oma (Helene Stanton) is the main antagonist in the 1955 action adventure film "Jungle Moon Men".

Priestess Oma is a Moon Goddess who is apparently an immortal whose only weakness is sunlight.  She rules over a devoted group of pygmies known as the Moon Men.  Oma worships the sun god Ra and Baku the goddess of the moon.

The Moon Men capture Bob Prentice (Bill Henry) and he is chosen to be her chief religious official.  He is fed a voodoo potion that would kill him once he tried to escape Baku.  Bob's friends who are traveling in the African jungle search for him, and they too are captured by the Moon Men.

They are taken before Oma, who at first pretends to be their host, and a great feast is prepared.  She explains that the god Ra punished them since he was jealous that they had learned the secret of eternal life.  So, one day he made the earth open up and swallow their cities and people.  Oma was the lone survivor, who escaped into the darkness and away from the wrath of Ra.  After the little people (pygmies) found her, she made them her subjects.  They fear her because they know she is immortal.  Oma reminds them that if she attempts to leave, Ra would destroy her.  She has had many men brought to her to be her High Priest.  They all remain until they die of old age.

Oma then showed them her stash of jewels, and explained that when Ra opened up the earth, Osiris revealed to her the treasures.  She warned them that if she finds that they are here for any reason other than to talk to Bob, she would imprison them in the dungeon of Osiris and held by the guardians of the temple (lions).

However, when Johnny attempts to get Bob out of his trance, Oma claims that they have desecrated the Temple and she orders them all destroyed.  Johnny Weissmuller (Johnny Weissmuller) agrees to trade places with Bob if she will release the rest of the group including Egyptian archaeologist Ellen Marsten (Jean Byron).  Oma agrees to this arrangement.

However, one of the men stole some of Oma's precious jewels, and Johnny fights him because he put them all in danger.  Oma arrives and believes that Johnny is responsible.  Oma decides to tie them all up and then release the lions.

Johnny's pet chimpanze frees them from the rope.  and Johnny, Bob and Ellen all escape while the others are mauled to death.

Oma reluctantly agrees to show them a hidden passage.  Weissmuller takes Oma against her will out of the temple into the light, and she crumbles into dust.  The Moon Men rejoice that they are finally free from the tyrant High Priestess.  Ellen has her proof to tell her story due to the chimp stealing the High Priest necklace. 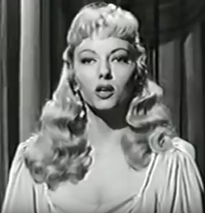 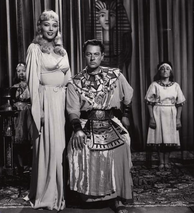 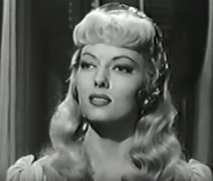 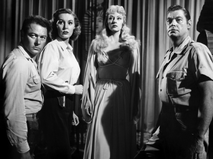 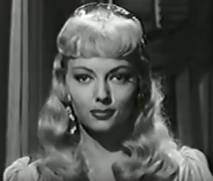 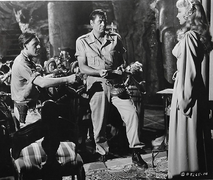 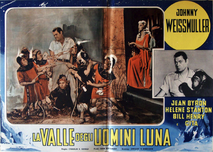 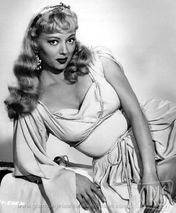 Add a photo to this gallery
Retrieved from "https://femalevillains.fandom.com/wiki/Priestess_Oma_(Jungle_Moon_Men)?oldid=178373"
Community content is available under CC-BY-SA unless otherwise noted.