Poison Ivy is a super-villianess from the DC Comics universe, most often associated with the Batman franchise. This is how she appears in Batman: The Animated Series.

Holding a PhD in botany from Gotham University, Pamela Isley was once employed by Chez Gerard, a cosmetics firm, as a research chemist in charge of developing new perfumes. She also offered a weekly lecture series at the university on rare and extinct plant species.

At some point, she met or introduced herself to District Attorney Harvey Dent, and they began dating. Unknown to him, she had marked him as a "murderer" for his part in arranging the excavation of land for the future site of Stonegate_Penitentiary. The excavation had involved bulldozing a field of wildflowers, including a rare wild rose that would have gone extinct, had she not saved it first. Appropriately, she used extract from the rose to create a rare and deadly poison, which she administered to Harvey through a deep kiss. Harvey fell into a coma and was not expected to live.

A personal friend of Dent's, Bruce Wayne investigated the crime as Batman. Discovering the origin of the poison, Batman confronted Isley (who revealed her nom-de-crime, "Poison Ivy") at her greenhouse hideout. During the confront, Batman was captured by Poison Ivy and held in by her mutant flytrap. She explained her motivation for poisoning Harvey to Batman before planting a deep poisonous kiss on him. Batman managed to knock Ivy back though and break free from her flytrap. In the ensuing struggle, Batman captured the rose as a "hostage," forcing Ivy to surrender the antidote she had developed. He managed to save Harvey's life, and Ivy was imprisoned in Stonegate (though later she would usually be imprisoned in Arkham).

Months later, having escaped or been released, Ivy opened an all-natural resort spa outside Gotham, under the alias "Dr. Daphne Demeter." The "Eternal Youth Spa" was a bait through which Ivy attracted wealthy business men and women guilty of certain environmental crimes. With the help of two henchwomen, Lily and Violet, she "treated" them with plant-derived toxins, which transformed the people into plants themselves.

By unfortunate coincidence, a greedy Wayne Enterprises executive had made a deal with a South American company to level a section of the Amazon rain forest, before Wayne aborted it. Ivy targeted Wayne for his perceived part in the deal, and Alfred Pennyworth attended in Wayne's place for a free spa getaway. When Alfred disappeared, Batman quickly deduced the doctor's true identity, and stopped Ivy's plan yet again.

After another escape, she was arrested at the Stacked Deck Club, over a poker game with The Joker, the Penguin, and Two-Face. Before the game, she exchanged a few amused reminiscences with her "old flame," Harvey Dent (the amusement was entirely one-sided). She recalled the time she put poison gas in pumpkins on Halloween and would explode when lit. She lured Batman into a trap at the city pumpkin patch, where she lit a pumpkin and let the gas slowly weaken him. In his weakened state, Ivy tried to unmask him, only for him to shove her away and attempt to run away before collapsing to the group, exhausted from the gas. Poison Ivy stood over Batman, explaining she has a natural immunity to "poisons, toxins, and the pain and suffering of others" before blowing him a goodbye kiss and leaving him to die. But Batman programs the Batmobile to chase her down, until she eventually crashes into her own pumpkins and Batman grans an oxygen mask from the vehicle.

Months passed, and for the first time, Ivy seemed to have returned to a normal life. Released from Arkham, Pamela Isley moved away from Gotham, married her psychiatrist, and embraced his two children as her own. Despite strange plant-related occurrences occurring, Batman and Robin were unable to link any connection to Isley. Unfortunately, Ivy had merely fooled the Dark Knight and Boy Wonder. Creating plant monsters to act as clones of her "family", Ivy had not only created a legitimate front for her activities, but also made a small drone factory. Though Batman and Robin once again foiled her plans, Ivy escaped.

After failing to meet the psychological requirements for rehabilitation, Ivy returned to Arkham and was present for the Trial of Batman. She acted as a juror and as a "witness", testifying towards Batman's involvement in her creation as a villainess.

A chance meeting during a heist at the Gotham Museum sparked one of Poison Ivy's most unique relationships. Harley Quinn, recently evicted from the Joker's gang, helped Ivy escape the clutches of the Gotham Police Department. Though the personalities of the two seemed completely opposite, their (somewhat) common goals bonded them into a formidable duo. Harley seemed to thrive on the experience of an honestly affectionate partner, while Ivy admired Harley's streak of fun and ingenuity, though she was exasperated by Harley's unshakable devotion to "that psychotic creep," Joker.

Shortly after uniting, they took Gotham by storm with a crime spree. Dubbed "The New Queens of Crime", their actions went unstopped for a long time. Despite his best efforts, Batman was unable to capture the two damsels, and only after their home was destroyed by the Joker were they captured by Renee Montoya].

Still, the bond had been forged. Unlike most villain team-ups, Harley and Ivy seemed to have a genuine friendship, as each helped the other with problems, be they personal or other. Though each also pursued her own area of interest, it was not uncommon for the two to team up, share a hideout, or rendezvous for the holidays.

Shortly thereafter, the two broke into the Gotham Monastery to steal a Tiffany rendition of the Trappist Orchid, a mosaic of an extinct flower commissioned by  Thomas Wayne.  Batgirl and Catwoman (who were working to clear Catwoman's name) attempted to reason with the two, but Harley accidentally discovered the true cause of the male disappearance: a weapon designed by Mr. Freeze.

Renee Montoya and the GPD arrived to arrest the women. Harley and Ivy escaped, but were branded accomplices in Catwoman's supposed crime. Gotham went into a hard lock down, but eventually the four women united. Donning a Batgirl outfit, Poison Ivy broke into a warehouse in Gotham's West District. Unmasked, she managed to evade capture long enough for Batgirl to discover the true cause of the disappearances: Dora Smithy. After the mystery was resolved, Harley convinced Catwoman and Poison Ivy to turn themselves in, as they had promised to Batgirl. However, they made no assurances that they'd stay captured, and the three escaped.

Eventually, Harley and Ivy found themselves lacking in funds.

Because of the "Big Bang" in Dakota, new metahumans had been created, several of whom were uncomfortable with their new-found powers and transformations. Through the Internet, Harley and Ivy set up a mock therapy and treatment group, and began contacting the "Bang Babies". One of their victims, Nails, was a student at Dakota High. Thinking she was heading for help, she discovered she'd been lured into a life of crime. However, Harley and Ivy were both former doctors, and still capable scientists in their fields. Though they convinced Nails to aid them in their plan (this time pilfering a shipment of gold from a cruiser), Static (who had followed Nails to Gotham) and Batman halted the scheme and captured Harley and Ivy once again. Alternate UniverseEdit In the alternate world of the Justice Lords, Poison Ivy was the lobotomized gardener for a vastly different Arkham Asylum. A brief exchange with the Flash revealed Ivy's once determined demeanor had been replaced by that of an ambivalent drone. Poison Ivy JL 01 An alternate reality Poison Ivy on Justice League. She snipped the heads off of roses without a blink.

Poison Ivy's has a unique genetic immunity from all forms of poison or toxin, including Joker Venom. However in exchange for this immunity, she admits she is infertile (unable to give birth).

She is also a chemist. Combined with her botanical background, Ivy frequently concocts poisons, toxins, and serums designed to kill, transform, or protect, depending on her purpose and needs.

She is also a uniquely skilled plant geneticist, able to create large and semi-sentient plant creatures that act as her henchmen.

In personal combat, Ivy is a skilled gymnast and martial artist and was skilled enough to defeat Batman hand to hand at least once throughout the series. Additionally, She carries a miniature repeating crossbow on her right wrist, which she typically uses as a last resort. 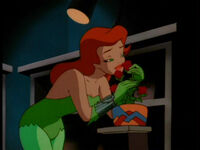 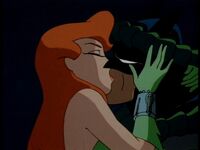 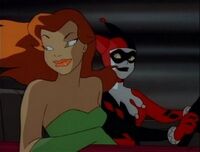 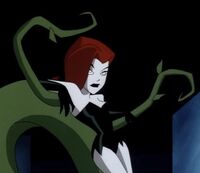 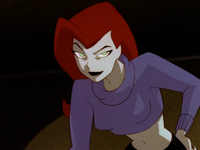 Add a photo to this gallery
Retrieved from "https://femalevillains.fandom.com/wiki/Poison_Ivy_(Batman:_The_Animated_Series)?oldid=201877"
Community content is available under CC-BY-SA unless otherwise noted.