Character - The Poison Ivy in this story is not the more familiar fanatical eco warrior with special powers, but a "normal," cunning female arch crook out to enrich herself through robbery. She appears to live in a mansion with a swimming pool, which might belong to "daddy." She attended an exclusive girl's school. Ivy and her gang have in the past committed their crimes in college towns.

Appearance - A pretty young "mod" blonde. Ivy is a blonde here, not a redhead.

Story - Poison Ivy and her 3 henchwomen are on a robbery spree in Gotham City. A bank raid has netted them $200,000. In her next caper, while Ivy distracts the guards, her gang steal an armored car full of loot.
Ivy then links up with Batman (who doesn't seem to know her, at least he pretends not to) and goes to the opera with him on a date. She is using the name Laurel Lee, not Pamela Isley. No other name is mentioned. Robin is left to tackle robbers on his own while Batman escorts Ivy around. The Boy Wonder arrives at the break in scene to confront the thieves. Though it's a hard fight on his own, Robin manages to force the thugs to run for it. Robin joins up with butler Alfred to tackle these robbers again during another of their heists; the pair fight the villains and put them out of action.

Robin and Batman later go with Ivy in the Batmobile to attend the grand opening of the new "Batman Hilton" hotel. But Ivy's female gang known as The Ivy Leaguers  are there too. The henchwomen gas some girls who are going to be "Robinette" waitresses at the opening party, and take the costumes for themselves. The guests at the hotel discover their jewellery has been stolen, and suspicion falls on the phony "Robinettes" ( Ivy's gang). Batman and Robin pursue Ivy's girls and bring them down with batarangs to their legs. But they find the crooks don't have any stolen jewels on them.

We next see Ivy - wearing her familiar green outfit - meeting her gang in the hotel basement - the henchwomen are now all clad in one piece bathing costumes. Batman and Robin burst in, but Ivy uses a fire extinguisher on them and the foam causes the duo to fall over. Ivy and her gang head for the roof with the Dynamic Duo in pursuit. There is a roof top pool which the villainesses dive into. Batman and Robin follow. But when the duo try to grab the gang they get an electric shock, the women are wearing electrified boots! Only the duo's gauntlets saved them from the strong possibility of being killed by the electric charges.

Ivy and her gang swim for an outlet pipe which takes them outside the hotel. They end up in the hotel's golf course water hazard. Batman and Robin arrive and Ivy signals with a whistle which brings a bunch of male thugs running. The hoods fight with the duo and lose. Batman and Robin confront Ivy and her girls (now out of the water) and tell the villainess to surrender. Defiantly Ivy throws a gas pellet at the duo. A bat sponge (!) absorbs most of the gas, so the heroes remain conscious; as Ivy and co do a runner the heroes take after them again. The female gang swing on vines over a quicksand pit, Ivy and her girls hoping Batman and Robin will follow and die by falling into the sand trap. But Batman instead directs the Bat laser to the vines holding the bad girls, which causes them to snap; Ivy and her hoodettes themselves fall into the quicksand. Much to their relief they don't completely sink under, as they end up standing on the buried stolen armoured car they'd heisted earlier. Batman tells the trapped female felons that the police will soon be along to get them out, and he returns to the Hilton hotel gala with Robin.

Note - Male thugs/crooks are added to the story (a bit awkwardly) three times so the action can include the usual Bat fights, as the Dynamic Duo can't/won't fight with female crooks (Batgirl, who could, not being around). 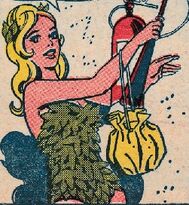 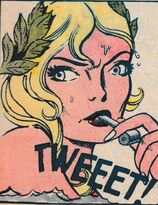 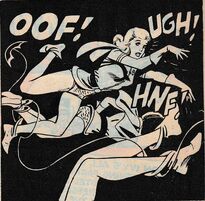 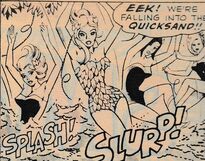 Add a photo to this gallery
Retrieved from "https://femalevillains.fandom.com/wiki/Poison_Ivy_(Batman:_Newspaper_Comic_Strip)?oldid=200236"
Community content is available under CC-BY-SA unless otherwise noted.