Pink is a boss from the arcade and Neo Geo video game The Super Spy (ザ・スーパー・スパイ).

She is a young blonde woman dressed in a short red minidress and red high heels, and is the boss of the 15th floor, as well as the penultimate boss fight in the game.

The Neo Geo game manual describes her as:

"Nationality and age are unknown. She uses are beauty to approach you. Characteristic of attack....She is good at karate."

When you originally find her, she appears to be another innocent hostage of the game's villains, the Zolge King terrorist group. But it is soon revealed that she is actually a member of the terrorist group herself when she stops playing the damsel in distress and sneak attacks the hero by stabbing him with a knife. She tells the hero "Take It Slowly!" and then the fight begins.

Pink has a few different attacks that she tries to kill you with, most of them involve her using her fists and legs, but she will also use the knife she stabbed you with earlier. She will also try and evade your attacks by ducking.

You can knock her back a few times with your attacks, but she will keep coming back for more until she is finally defeated.

...but she attacks you with a knife

Scratching you with her long red nails

Kicking you with a high kick

Ducking from your attacks

Being hurt by a punch

Being hurt by a weapon

Knocked back by your attack 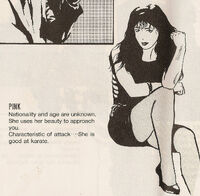 Pink as she appears in the game manual
Add a photo to this gallery
Retrieved from "https://femalevillains.fandom.com/wiki/Pink_(The_Super_Spy)?oldid=193782"
Community content is available under CC-BY-SA unless otherwise noted.