Phoebe Snow (Cheryl Miller) is the henchwomen of The Weatherman in the 1976 episode "The Weatherman" of the TV series Monster Squad.

Phoebe is a henchwoman for the villain called The Weatherman (Avery Schrieber), who wants to unanimously be elected President of the United States.  If he is not he will force the country to endure severe weather for months.  He plans to bury Wisconsin in ice, and sends a freak snow storm in July.  The Weatherman's other henchman is David Frost (Owen Orr).

The Monster Squad learns that the Weatherman's headquarters is located at an old U.S. Government weather research center.  He has armed himself with a weapon called a "thunderbuss", that can freeze lving tissue.

The Bruce W. Wolf (Buck Kartalian) falls prey to the device, and Dracula (Henry Polic II) and Frank N. Stein (Mike Lane) must attempt to defeat the villain and thaw out their friend. 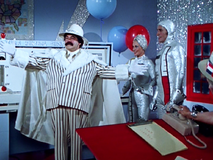 Add a photo to this gallery
Retrieved from "https://femalevillains.fandom.com/wiki/Phoebe_Snow_(Monster_Squad)?oldid=202031"
Community content is available under CC-BY-SA unless otherwise noted.