Penny is a villainess from the comic Batman '66 #2. She appears in the story Emperor Penguin as a henchwoman of The Penguin.

The Penguin has teamed up with Mr Freeze to create a giant iceberg near Gotham Harbour, blocking cargo ships from entering. He plans to charge the ships large sums of money to pass. He has some how managed to get his iceberg recognised as a country called Penguinia, meaning stopping his plans isn't so straightforward for Batman and the police.

Penny's role is minor in the story. She frequently holds on to an umbrella that can fly her around, and she uses this to float down to the police to show them that the iceberg is a country, she also collects the money from the cargo ships so they can pass through. She also tries to use some kind of knock out gas on Batman but it doesn't seem to fully knock him out.

Ultimately good triumphs over evil and Batman manages to stop the iceberg and Penguin's plans, Penny manages to escape the iceberg with Penguin and Mr Freeze while the rest of Penguins' men get defeated and arrested. But the trio escape empty handed as they forget to bring the money they had made from the cargo ships. 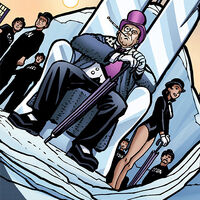 At The Penguin's side 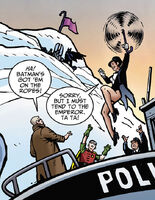 Flying back to The Penguin

Motivated by the money they make

Batman is locked up and his utility belt has been removed

Taking money from the cargo ships 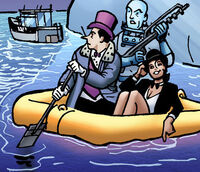 Escaping justice
Add a photo to this gallery
Retrieved from "https://femalevillains.fandom.com/wiki/Penny_(Batman_%2766)?oldid=68686"
Community content is available under CC-BY-SA unless otherwise noted.