Start a Wiki
watch 01:39
The Loop (TV)
Do you like this video?
Penelope Spectra is a ghost villainess that has the ability of disguising herself as a human. She keeps her human form young and beautiful by feeding on people's misery, especially on the depression of teenagers. Her true form is that of a shadow-like creature. She is voiced by Tara Strong.

Spectra first made her appearance in "My Brother's Keeper," posing as a teen therapist/counselor and motivational speaker at Casper High School. She was there in part to build up spirit for the students in time for the Casper High Spirit pep rally. Despite her incredibly chipper attitude and use of meaningless inspirational catchphrases, she has a seductive tendency to tell her patients things that leave them incredibly depressed, Danny being her favorite victim.

Danny, Sam, and Tucker later figure out that she is a ghost, hiding it by always having the air conditioner turned up so that Danny's ghost sense was lost among normal breaths from the cold. They also learn about her plans to up the ante of depression by killing Jazz in the school pep rally so that she can suck up the ensuing severe depression of the other students and forever remain youthful. Danny, however, manages to save Jazz in time, trapping her assistant Bertrand in the thermos as well as Spectra herself - the latter with help from Jazz using the Fenton Ghost Peeler.

Spectra returned again in "Doctor's Disorders." Her ultimate goal was to create the perfect human body for herself to inhabit. She tried to achieve this by gathering DNA samples from the various students in Casper High through the means of ghost-bugs overshadowing them, and sending them to a fake hospital resembling the old, disturbing ones found in the days before safe medicinal practices. Knowing that she needed Danny's DNA to grant full power to her "body" as well as stabilize it, she tried to capture him and extract it from him personally. Danny later finds out Spectra's plans, but when Danny's DNA is about to be taken, Danny instead lets his father's handkerchief he blew on earlier get sucked up instead, so by the time Spectra's perfect body fully activates, she gains Jack's giant figure and later turns into a living pile of mucus. Danny defeats her afterwards and traps her in the Fenton Thermos.

In "Reign Storm," Spectra can be seen among other ghosts fleeing the Ghost Zone after Pariah Dark started destroying all their homes. She was also one of the many ghosts to help Danny save Christmas in "The Fright Before Christmas."

In "Girls' Night Out," Spectra allies herself with Kitty and Ember McLain in a joint attempt to get rid of every man in Amity Park. They are later defeated by Sam, Jazz, and Maddie.

Spectra's final appearance is in the series finale, "Phantom Planet." She is first seen terrorizing Paulina Sanchez and Star in the halls of Casper High, appears later with the many ghosts who fought Danny in the Ghost Zone, and finally is one of the many ghosts who helps Danny and Skulker turn the entire planet intangible, so that the Disasteroid can pass through it. Spectra is seen in all three of her main forms: her "My Brother's Keeper"/"Girls' Night Out" body, her shadow form, and her powered-up body from "Doctor's Disorders."

In her true form, Spectra is a wispy black ghost, essentially a humanoid shadow with an advanced mind of her own. She has glowing red eyes, sharp teeth, and claws, and wears purple lipstick. She has flaming spiky black "hair" and a ghostly tail. She lacks a distinct identity to her disguised human form.

In her main human disguise, Spectra has fair skin, green eyes, and red hair pointed in a U-shape with orange highlights. She wears purple lipstick and eyeshadow, circular purple earrings, and black sunglasses. She wears a business suit consisting of a red suit jacket over a white long-sleeved shirt with a black necktie, a red skirt, and red high heels.

In "Doctor's Disorders," Spectra creates her ideal "perfect body" for her ghost form to inhabit. This body is similar to her main human disguise (same hair, eyes, and makeup), but has paler skin, sharp teeth, triangular purple earrings, and no glasses. Her new outfit consists of a green necklace, a black V-neck crop-top with green trim on the sleeves, green arm-length gloves, black pants with green trim on the waist, and green high-heeled boots that reach her thighs and have flame designs at the top.

Penelope Spectra bears a very strong need of being young and beautiful, going though unscrupulous means in order to keep her youthful appearance, and freaking out if she becomes old or ugly. She might be one of the most sadistic ghosts in the show, along with her assistant Bertrand, as they happily feed on the misery of others and attempt to murder people (first Jazz, then all of the Casper High students) in order to accomplish their plans. She is smart and dissimulative, as she persuades many people to think that she is really a counseler, and she presumably has remained much time in the human world feeding on the misery of students. This also indicates her deep knowledge on psychology, as shown when she uses her falsely kind words to expose the teenagers to their deepest fears, leaving them in a state of depression that gradually worsens whenever they interact with her further.

They are never seen in an episode without each other, but they seem to gradually grow distant from one another along the series. In "My Brother's Keeper," they seem to have a friendly relationship, even planning in the hallway to have a capuccino together. In "Doctor's Disorders," they seem to have little to no relationship, but are still partners. In "Girls' Night Out," their relationship has a completely different perspective: Spectra views Bertrand as annoying and treats him badly, to the point of wanting him gone forever when Kitty's kiss made him vanish, but that was probably done to fit into the theme of the episode.

Spectra mainly sees Danny as an excellent source of whatever she's seeking in that episode, whether it be his misery that she can feed off of in "My Brother's Keeper" or his unique half-ghost DNA in "Doctor's Disorders." However, he becomes her enemy once he starts to fight back and defeats her.

Ember and Kitty are two of Spectra's friends and the three seem to be close, as they work together to get rid of all men and take over the town in "Girls' Night Out." 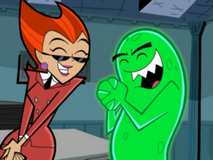 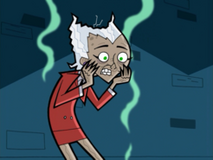 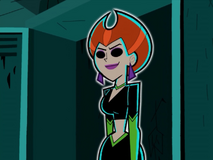 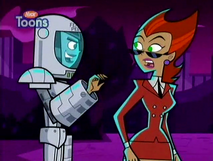 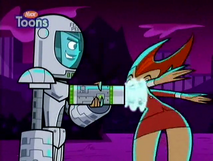 Add a photo to this gallery
​​​​​​
Retrieved from "https://femalevillains.fandom.com/wiki/Penelope_Spectra_(Danny_Phantom)?oldid=194125"
Community content is available under CC-BY-SA unless otherwise noted.