Start a Wiki
watch 01:48
The Loop (TV)
Do you like this video?
Paula Reiser (Sprague Grayden) is the main villainess from "A Dollar and a Dream," the antepenultimate episode of Without a Trace's sixth season (airdate May 2, 2008). She is the wife of Eliot Reiser and the sister of Jeff Turner, as well as the best friend of Jeff's girlfriend, Lacey Moran.

Some time ago, Lacey won a $32 million lottery jackpot, but as revealed in the middle of the episode, the winning lottery ticket was not hers. The person who actually bought the ticket was an elderly man named Desmond Carter, who was dying of cancer and was visited and befriended by Lacey. After Desmond passed away, Lacey and Paula were at the apartment, as the former was packing Desmond's things. It was there that Lacey found his lottery ticket, which Desmond bought a week before his passing, and told her friend that the ticket was a winner, as all of the numbers matched. Paula congratulated Lacey and told her that she'd be rich, with Lacey stating that she can't keep the ticket and later saying that his son, Alex Shaw, should have it. She was convinced to keep it by Paula, stating (in so many words) that Lacey deserved it for being a true friend to him, while Alex abandoned him.

After Lacey was confronted by Alex and accused of stealing from his deceased father, she became racked with guilt and planned to give the money to Alex. She went camping with Paula, Eliot, and Jeff late one night, but on the next day, Lacey informed Paula about her plans to give the money back. Paula became enraged and accused Lacey of being selfish, stating that she and the others had plans for the money and did not want to go back to being "dirt poor." Lacey told her greedy friend that her mind was made up just as she headed to her car, but at that moment, Paula turned heel and bludgeoned Lacey's head with a water bottle, killing her instantly.

Eliot and Jeff had noticed the women arguing and ran towards Paula after she killed Lacey. The villainess talked Jeff out of calling the police and convinced both her brother and Eliot into buring Lacey's body, while Paula left the campsite posing as Lacey. Paula continued posing as Lacey following the murder, which included an encounter with Alex, who was waiting for Lacey. Alex mentioned his encounter to Jack Malone, after Jeff was found dead in his car (having committed suicide) and that led to the deduction that Paula and Eliot were involved in Lacey's disappearance. The couple was brought in, with Elena Delgado interrogating Paula. After denying everything at first, the evil Paula confessed to killing Lacey (only after she made Delgado promise that Eliot would be kept out of it) and posing as her, while also stating that Lacey had no right to return the money. Both Paula and Eliot were arrested (off-screen) for their roles in Lacey's murder. 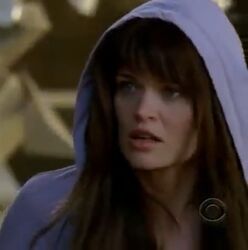 Paula disguised as Lacey
Add a photo to this gallery
Retrieved from "https://femalevillains.fandom.com/wiki/Paula_Reiser_(Without_a_Trace)?oldid=193877"
Community content is available under CC-BY-SA unless otherwise noted.