Ms. Sweepstake is personal assistant to the eccentric billionaire Ernest William Coolbeach, who likes to travel incognito in economy class. They are boarding a flight from South America to Paris at the beginning of the episode. Among the passengers is also Bianca Negra Y Colorès, a young attractive woman already three times a widow. The fact that her deceased husbands have always left her a fortunate has earned her the nickname “Black Widow” and raised many suspicions about the nature of their deaths. Soon after take-off, strange incidents torment the crew and passengers: a venomous spider causes a panic among the passengers by escaping. Then, it turns up on Coolbeach’s knee and bites the billionaire. All suspicions immediately fall on Bianca as a result of her notoriety as “the black widow”. After several more turbulent incidents, a whole storage of venomous snakes and scorpions is discovered in the luggage cabin. The captain therefore decides in favour of an emergency landing. Inside the Latin American airport, the investigation on those strange occurrences continues. Until that point, the villainess has had no significant role in the story: Pamela Sweepstake does not talk much, hides her eyes between dark shades and comes across as the typical unsmiling secretary in her grey business suit.

At some stage, we learn that the assassination attempt against Coolbeach has nothing to do with a venomous spider; in fact, the evil Pamela Sweepstake carries a ring with a small spike on its lower side, which she dipped into venom only to force it into her boss’ knee during the flight. As Natacha is about to find out the hidden villainess, the murderous secretary follows her into the bathroom and tries to hit her with her ring. Natacha reacts just in time, so that a violent fight erupts between the two women. The heroine puts up a brave fight but she ends up being viciously strangled by the evil Pamela. Fortunately, Natacha is rescued by her colleagues who grew suspicious of her long absence and followed her into the ladies’ room. Pamela gets her head banged against the sink before she is immobilised in a headlock. The semi-conscious villainess is then handed over into police custody.

Under interrogation, she confesses the murder (she still thinks she has actually killed her victim). The motive was, quite simply, greed. Coolbeach apparently promised several times to make her the heiress of his fortune but changes his testament in favour of his niece every time they travel to Paris, where that relative lives; that is why, according to the villainess, he had to die before arriving to their destination. It is also here where she learns that Coolbeach is, in fact, recovering, thanks to the first aid provided by the suspected “black widow”, Bianca, during the flight. Furiously, Pamela grabs one of the scorpions and uses it to take Bianca hostage. She drags her captive into one of the favelas of the Latin American city. There, she ties up Bianca and leaves her to be killed by the scorpion. Followed by Natacha and the inhabitants of the shanty town, she is soon cornered. In a final attempt to escape, the villainess breaks through one of the fragile walls of the shed and lands on the muddy road. Natacha confronts her once again. Surrounded and with no chance to escape, the violent Pamela still refuses to surrender and attacks Natacha. The heroine is encouraged by Bianca and the locals as she now gives the evil Pamela the thrashing she deserves. This time, Pamela has no chance against a fully determined Natacha. After a few hefty kicks and punches, the wicked evildoer is knocked out and lands headfirst in a pile of garbage. Only her legs and waist surface from the refuse, but her business suit and pumps are sullied with mud and her feet remain high up in the air, a clear indication that she's out cold. Natacha is acclaimed by an enthusiastic crowd before the villainess is handed back to the police for good. 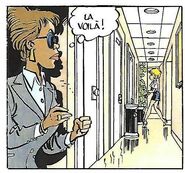 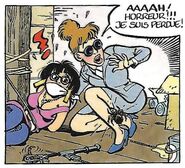 Add a photo to this gallery
Retrieved from "https://femalevillains.fandom.com/wiki/Pamela_Sweepstake_(Natacha_H%C3%B4tesse_de_l%27Air)?oldid=138866"
Community content is available under CC-BY-SA unless otherwise noted.