Start a Wiki
watch 01:48
The Loop (TV)
Do you like this video?
Pamela Morris (Ann Blyth) is a femme fatale in the 1964 episode "Queen of the Nile" for the TV science fiction series "The Twilght Zone".

A journalist discovers too late that the Movie Star he is dating is actually a centuries old femme fatale who uses murder and black magic to keep her youth. The journalist also discovers that the woman Pamela says isn’t her mother is actually her daughter, and when he confronts Pamela with this she incapacitates him and places a scarab beetle on his body, that drains his youth and kills him!.[The script ambinguidly hints that she is either Queen Cleopatra..or a ancient Movie star who is well over 130 years old! {In truth of course both Blyh and Phillips were in their mid thirties]

Contrary to her screen persona as a killer in the 1945 movie "Mildred Pirece" and on the TV Series "Quincy M.E"; [two different episodes] where she is exposed as murderess by Dr. Quincy, retired actress Ann Blyth is in real life a devout Roman Catholic and was honored with her husband with the honorific rank of Lady and Knight of the Holy Sepulchre in a ceremony presided over by Terence Cardinal Cooke.


Lee Phillips [1927-1992] real name was Leon Friedman [Russian Jewish heritage]. Ironically in 1965 episode of "Perry Mason" he played a man who is exposed as a murderer. The part where his body becomes dust is actually reused cinema footage from the "Twilight ZOne" episode "LOng Live Walter Jameson" in which a 2.000 years old man dies after he is killed by an elderly wife he abandoned.

This episode was re-made into a 1990 movie "Eternity" in which a woman uses sex with younger men to drain the lifeforce out of males to remain young [Imdb on Queen of the Nile]: note this 1990 "comic retelling" has a scene of men willingly becoming her victiums..except one who refuses to do so...which results to her horror...she becomes Older!'' 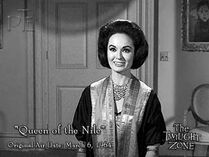 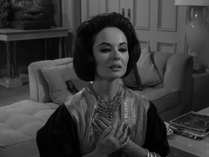 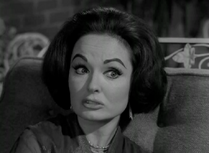 Add a photo to this gallery
Retrieved from "https://femalevillains.fandom.com/wiki/Pamela_Morris_(The_Twilight_Zone)?oldid=184068"
Community content is available under CC-BY-SA unless otherwise noted.