Start a Wiki
watch 01:48
The Loop (TV)
Do you like this video?
Kara Zor-El, aka Overgirl (Melissa Benoist) was the main villainess from the Arrowverse crossover event, "Crisis on Earth-X." The crossover served as the eighth episodes of Season Three of Supergirl, Season Six of Arrow (airdate November 27, 2017), Season Four of The Flash, and Season Three of Legends of Tomorrow (airdate November 28, 2017).

Overgirl was an alternate version of Kara Danvers/Supergirl, and she resides in Earth-X (previously known as Earth-53)--an alternate Earth with the same history as Earth-1, except that the Nazis won the Second World War and Hitler ruled the worldwide Reich for an additional 49 years until his death in 1994. She served as the general in the current Nazi army, ruling alongside her husband and the planet's Fuhrer, Oliver Queen (aka Dark Arrow). Having ruled Earth-X for so long, the villainous Nazi doppelgangers set out to rule other Earths.

In Part 1 (Supergirl), Overgirl and her Nazi minions invaded the wedding between Barry Allen and Iris West, which had members of Team Arrow, Team Flash, and the Legends attending. While the rest of the heroes fought the minions, Overgirl fought Supergirl, with the former concealing her face with a mask. It was at the end of Part 1 that the main Nazis were revealed, and in the final scenes, Overgirl revealed their plan to obtain a powerful prism, which could be used as a superweapon.

In Part 2 (Arrow), Overgirl, Dark Arrow, and Reverse Flash came face-to-face with their counterparts, who were shocked at their appearances. Overgirl mocked Supergirl's righteousness before their battle, which saw the Green Arrow Oliver Queen fire a Kryptonite arrow at her, weakening the Nazi supervillainess before she and her cohorts escaped. The villainous Nazis successfully took the prism, killing many in their quest, and after this, their motive for taking the prism was revealed when Overgirl suddenly collapsed, as exposure to radiation was killing her. The prism was needed as part of their plan to take Supergirl's heart to save Overgirl, and it was after this that Supergirl was taken at episode's end and prepped for surgery, while the other heroes were imprisoned at either Star Labs, or on Earth-X.

The evil and callous Overgirl continued her mocking of Supergirl in Part 3 (The Flash), telling her heroic doppelganger that people should fear her because of her powers, which make her better than everyone, while also stating that real power comes from eliminating the weak and not saving them. Supergirl is saved by Felicity Smoak and Iris, but under the threat of Felicity's life by Dark Arrow, Supergirl gives herself up and preps herself for surgery, while Felicity gave the code to turn the power back on. Ray Palmer (as the Atom) appeared and prevented Eobard Thawne from cutting Supergirl in the beginning of the conclusion (Legends of Tomorrow), and Supergirl was saved for good by Ray and Felicity.

Overgirl's radiation made her a literal ticking time bomb, and the Earth-X Nazis planned to use that to endanger Earth-1. After Green Arrow turned down Dark Arrow's request to surrender Supergirl in exchange for a peaceful return to Earth-X, the gang of heroes fought the Nazis once more, with a full powered Supergirl challenging her evil Nazi doppelganger. The villainess masked herself and left her ship to fight Supergirl, but during the battle, her radiation became unstable, leading to Supergirl to fly her above the Earth to avoid mass destruction. Once they were above the planet, Overgirl exploded, sending Supergirl crashing down and caught by Nate Heywood (as Steel). 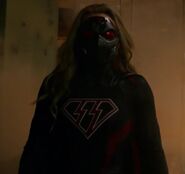 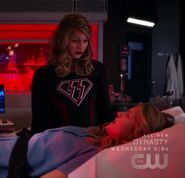 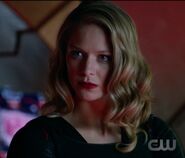 Retrieved from "https://femalevillains.fandom.com/wiki/Overgirl_(Arrowverse)?oldid=164839"
Community content is available under CC-BY-SA unless otherwise noted.