Olivia's brief backstory revealed her original name was Denise Ferris, and that she (by her own account) grew up poor; likely motivating her desire to become wealthy through any means necessary. In adulthood, Denise became the lover of conman Edward "Eddie" Bixler, getting arrested with him for several small con jobs before using the identities of deceased women to open a phony charity that donated money to free women's clinics; using the charity to embezzle money.

Olivia also began using her aliases to seduce and marry wealthy men, killing them once they were married in order to inherit their wealth. The film's opening showed Olivia (then a redhead going by the name Grace) leaving her husband Lucas Miller for a supposed business trip, allowing for Eddie to kill Lucas by shooting him to death.

Three years later, the film's events have Olivia adopting her new name and becoming a false benefactor for a free clinic run by Jill Keegan, the sister-in-law of successful architect Danny Keegan and the friend of photojournalist Melanie "Mel" Dempsey (the latter being the film's main protagonist). At a party being held by Danny, Olivia met and charmed Danny, eventually starting a whirlwind relationship with him. This put Olivia at instant odds with Mel, who had secret feelings for Danny and developed suspicions about Olivia after seeing her get into an argument with Eddie.

After Danny missed a gallery showing Mel had due to being with Olivia at the time, Mel ran into Olivia while she was visiting Danny at work, with Olivia walking Mel to the door before deducing that Mel had unresolved feelings for Danny. After denying the insinuation and stating that all she cared about was her treating Danny right, Olivia subtly boasted that she did before accusing Mel of not wanting Danny to be happy and referring to her as sad and pathetic, even threatening Mel if she didn't let Danny go. Olivia later returned to Danny and claimed Mel didn't like her, with Danny defending Mel and professing that they were simply close friends.

Throughout the film, Mel began investigating Olivia's mysterious past and her illegal business, with assistance from her co-workers Finn Driver and Henry, with Olivia catching on to Mel's invesigation after catching her fleeing from searching her office. Realizing Mel was on to her, Olivia went to Danny and claimed Mel was stalking her, and later learned that Mel had set Eddie up to leave his hotel room so she could find proof against her, doing so by calling him and claiming Olivia needed to meet him at the clinic. After photographing evidence of Olivia's other identities, Mel managed to hide in the closet before Edward and later Olivia arrived, overhearing her order Eddie to kill Mel to silence her before giving Eddie oral sex; officially revealing Eddie as her lover on top of being her accomplice.

As Mel and Finn found more evidence to Olivia's faulty charity, the villainess ordered Eddie to kill Mel in order to stop her from exposing her, rejecting Eddie's protests that it would be too risky and that they were better off cutting their losses and fleeing town. Eddie's attempt to go through with Olivia's demand when Mel arrived home was thwarted when Danny showed up to confront Mel, with Danny dismissing Mel's attempts to warn him about Olivia as jealousy. Mel was similarly disbelieved by Jill when she tried to tell her about Olivia's lies regarding her charity, with Olivia ejecting her from the clinic. In the parking lot, Mel confronted Olivia about her scheme and blasted her as self-centered, with Olivia boasting about using men to get what she wanted while defending her fradulous charity by stating that she would helping hundreds of uninsured women, leaving after making another veiled threat to Mel.

As Mel continued her investigation and found that the women on Olivia's charity were all aliases of Olivia's, Danny went about proposing to Olivia, who accepted as part of her scheme to kill Danny and make off with his wealth. Mel also learned about the mysterious deaths of two of Olivia's past husbands: Lucas and hotel magnate Scott Chance (who she married under her alias Abigail).

Having uncovered Olivia's status as an evil black widow, Mel received the contact information for Cooper and Tiffany Collins (Lucas' business partners) and booked a fligiht to meet them in Dallas, Texas; enlisting Finn to take a photo of Olivia to give to them. On her way to the airport, Mel was nearly killed by Eddie after he ran her off the road, only to be spared when a pair of men stopped to help her. After reporting back to Olivia, who became enraged at Eddie for failing to kill Mel and allowing her to see him, Eddie suggested they flee town under the argument that they already had enough money to live off of together. Olivia appeared to agree to Eddie's plan, only to double cross her lover by taking his gun and shooting him twice in the chest, killing him.

In Dallas, Mel met with Cooper and Tiffany, who confirmed that Olivia and Grace Miller were one in the same and that they (like Mel) had had suspicions about her that they could never prove. Tiffany decided to return with Mel to confront Olivia, and while she was waiting for Tiffany to get the jet ready, Mel received a call from Finn, who revealed Olivia's original identity and how Eddie had been found murdered. After having Finn hand over the evidence she had to the police, Mel returned home with Tiffany and confronted Olivia while she was with Danny, Jill, and Matty Keegan (Jill's husband and Danny's brother). Olivia once more portrayed herself as a victim of Mel's jealousy, claiming she had hoped they could be friends, but Mel continued her claims about Olivia's true nature as a serial killer, even admitting to being in love with Danny. Eventually, Mel had Tiffany come out to prove her claims truthful, much to Olivia's shock, and the truth is solidified further when the police arrive with the intent to arrest Olivia for her crimes.

With her murderous schemes exposed and about to fall apart for good, Olivia broke down into a blind rage by pulling a gun from her bag and attempting to hold Mel hostage, getting into a struggle with her that ended in Mel being shot non-fatally in the arm, finally exposing her true evil nature to a shocked Danny. Olivia was then confronted by police officers, who ordered her at gunpoint to drop her weapon, but the enraged villainess instead aimed her gun at the officers in a desperate attempt to shoot them; her attempt pathetically failed as Olivia ended up being shot to death by the police before she could fire her gun, with her body falling into the nearby pool. 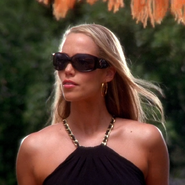 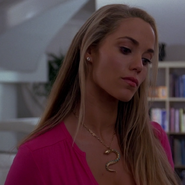 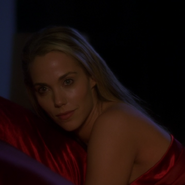 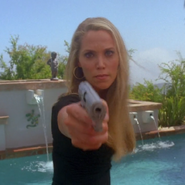 Olivia's final moment before her demise

Olivia's deceased body in the pool
Add a photo to this gallery
Retrieved from "https://femalevillains.fandom.com/wiki/Olivia_Whitfield_(Black_Widow)?oldid=222563"
Community content is available under CC-BY-SA unless otherwise noted.