Start a Wiki
watch 01:48
The Loop (TV)
Do you like this video?
Olivia Peterson (Ashley Wood) is the main villainess of the 2017 Lifetime film Wicked Moms Club (alternately titled Momster and Mom Wars; airdate October 7, 2017). She was the president of the PTA of Sayre High School—which her daughter Chelsea and her best friend Paige (daughter of main protagonist Mandy) attended.

Olivia played herself up as being a perfect and flawless mother, but she only did so to hide her true evil nature. To elaborate, she controlled Chelsea and forced her to participate in gymnastics at school, doing so mostly to make herself look good in the eyes of other mothers. The villainess' domineering nature prompted her daughter to post anonymous blogs about the torment she suffered in an attempt to be perfect and live up to her mother's expectations.

She was also a cruel bully, using her power and status to blackmail others into kowtowing to her, only to ruin their lives when they (in her mind) crossed her. For example, the callous woman believed that her husband Beau was having an affair with Ginny, and despite proven claims that there was no affair whatsoever, Olivia stuck to her beliefs and destroyed Beau's purported mistress—to the point that Ginny committed suicide in the film's very first scene. She also tormented Suki (a fellow PTA mother), who had suspected that Olivia was embezzling funds, but couldn't prove the claim.

In the film's events, Olivia acted as a friend to Mandy, who was new to Havenhurst after Paige was kicked out of her former school, and played up the false persona in front of fellow moms Colleen and Reyna. Once Paige outshined Chelsea in gymnastics, however, the evil manipulator began sabotaging both her and Mandy. She set up the protagonist with Ellis (who was separated—not fully divorced—from his wife) and then branded Mandy as a homewrecker by claiming that she was having an affair with him. Along with vandalizing Mandy's new house, the delusional sociopath also set up Paige as a drug user, having her drug test tampered with so she would be kicked off the gymnastics team. Furthermore, Olivia planted prescription pill bottles in Mandy's car and sent Colleen's police officer husband, Jim, to take her into custody.

Mandy had suspected that Olivia was tormenting her, and the latter's villainy was revealed by both Suki and Chelsea. It was after Chelsea revealed herself as the creator of the blog that she and Mandy worked together to expose Olivia, and in the film's climax, what was supposed to be a slide presentation turned into Chelsea revealing herself as the anonymous blogger and how her mother's behavior has tormented her. Olivia denied her daughter's claims and accused Mandy of paying Chelsea to state her accusations, but it was at that moment that the protagonist encouraged those in attendance to stand up to the villainess, which many did. Olivia blasted Chelsea as being "ungrateful" and claimed that everything she did was for her daughter, but after realizing that she was on the verge of defeat, Olivia attempted to slap Mandy—only to strike Jim instead. Having also grown tired of Olivia's bullying, he handcuffed and arrested her, with the latter swearing revenge on everyone who stood up to her as she was taken away. 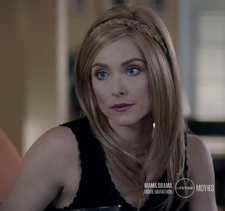 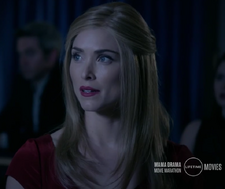 Add a photo to this gallery
Retrieved from "https://femalevillains.fandom.com/wiki/Olivia_Peterson_(Wicked_Moms_Club)?oldid=203119"
Community content is available under CC-BY-SA unless otherwise noted.