Start a Wiki
watch 01:48
The Loop (TV)
Do you like this video?
Olivia Cranor (Elizabeth Leiner) is the main villainess from the 2019 Lifetime film, Suburban Swingers Club (airdate March 9, 2019).

Olivia Cranor is the wife of Noah Cranor, who habitually hosted a swingers party at the household, with the participants known as "The Circle of Trust." Though Olivia appeared to be a willing participant in the parties, she actually hated them, mainly due to Noah's wandering eye. Noah had numerous affairs after his parties, with one of them being with Giselle Monahan.

In the film's events, Lori and Grant Malick (the former being the main protagonist), appeared at one of Noah's parties--mainly under Grant's suggestion--and it was at the setting that Lori was selected to go with Noah. Following the party, Lori became the object of Noah's affection and obsession, as he began stalking Lori and even blackmailed her with a video of them together.

As for Olivia, her first appearance in the film had her asking Lori if she had seen Noah, but in actuality, she had known full well about her husband's obsession with Lori. She had learned that Noah was planning on leaving her, which added to her increasing anger over Noah's dalliances, as she would be left with nothing in a divorce. Olivia turned heel and planned to kill her husband, and knowing that Noah continue his pursuit of Lori, the villainess followed him to Lori's house, where he was drugging Lori's wine. After Lori drank the wine and began feeling the effect, Olivia entered and stabbed Noah to death, and later dumped Noah's body over a cliff. As a result of Noah's death, Olivia benefitted financially from her joint insurance policy (though the amount wasn't revealed).

Olivia's plan was to frame Lori for the murder, and afterwards, she masked her heel persona by acting as a worried wife looking for her husband, continuing the act after Noah was found. Grant ended up arrested for killing Noah, due to an earlier confrontation with him, leaving Lori to investigate on her own to clear her husband, even after learning about Grant's affair with Giselle. Giselle was suspected, but after she told Lori about Olivia selling the house, Lori visited Olivia, who acted hostile towards Lori and accused Grant of killing Noah.

While at Olivia's house, Lori saw a passport in her drawer, as well as a bracelet with the heart charm that Lori had found, which began Olivia's reveal. It was cemented when Olivia drugged Lori's coffee, but just as Lori was about to drink from the laced cup, she was interrupted by her sister, Kat, honking her horn. Lori later asked Kat to call Olivia and set up a meeting under the pretense that she knew about Olivia killing her husband, with the villainess leaving her house. However, the evil Olivia appeared at Lori's house and knocked out Kat with a golf club, and afterwards, she spotted Lori and drugged her before tying her up and gagging her with duct tape.

Olivia took Lori to Giselle's house and planned to kill her, as well as frame Giselle for not only Lori's murder, but Noah's as well. The deranged villainess revealed that she killed Noah and her reasons for doing so, and as part of her maniacal rant, Olivia accused Noah of abusing her physically and emotionally, while also voicing her anger over Noah planning to leave her with nothing. She added that Lori would have done the same thing under the circumstances, all while wielding a knife and going after her, with Lori knocking out Olivia with a fruit bowl. After Lori escaped, Olivia was handcuffed and arrested for her husband's murder and the attempt on Lori. 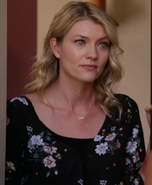 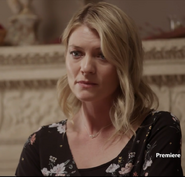 Add a photo to this gallery
Retrieved from "https://femalevillains.fandom.com/wiki/Olivia_Cranor_(Suburban_Swingers_Club)?oldid=146567"
Community content is available under CC-BY-SA unless otherwise noted.