Start a Wiki
watch 14:21
The Loop (TV)
Do you like this video?
Olivia Brooks (Lisa Ann Walter) was a hidden villainess from the 2010 film, Killers. She was the wife of Henry Brooks, who was a co-worker and friend of main protagonist Spencer Aimes, and she was first shown at a party at the home of Spencer and his wife, Jen Kornfeldt.

Henry was the first of a long list of revealed dormant killers operated by a hidden agent (later revealed to be Spencer's father-in-law), who placed a $20 million bounty on Spencer. Shortly after Spencer and Jen dealt with another killer, Vivian (Spencer's secretary), Olivia appeared and ran down a delivery driver--yet another killer who was attempting to collect on the bounty. Shortly after killing the driver, however, Olivia revealed herself as a villainess and attempted to run down Spencer to collect the bounty herself, only for Jen to appear and ram Olivia's car into a fuel tank. Later on, the evil Olivia engaged in a gunfight with Spencer, which ended with Spencer shooting at the tank and causing it to explode, killing Olivia. 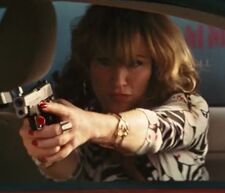 Add a photo to this gallery
Retrieved from "https://femalevillains.fandom.com/wiki/Olivia_Brooks_(Killers)?oldid=169134"
Community content is available under CC-BY-SA unless otherwise noted.