Start a Wiki
watch 14:21
The Loop (TV)
Do you like this video?
Olinka Casanova-Romanoff is the evil protagonist of "Serpenterie", a short story found within the 1988 Italian comic "Superfumetti #1: Sadomania" by publisher Edifumetto. She was created by artist Giovanni Romanini.

A depraved woman with a sexual attraction to reptiles, Olinka is always looking for a new perversion to explore. Fooling a young man into believing that she wants to buy a carpet, she invites him back to her home. Once there, she urinates onto the floor so that the man slips and falls, and then hits him in the back of the head with a wrench to knock him unconscious.

When the man awakes, he discovers himself stripped nude and imprisoned in a cage high off of the ground. Olinka explains to him that her pet snake is of a coprophilic species, and inserts the reptile up into his body. The snake proceeds to burst out of the other end, killing the man, while Olinka masturbates below. However, the woman's other pet, a giant lizard named Zalamort, smells the fresh blood from the other room. Crawling out of his tank, he then approaches his unsuspecting, blood-soaked mistress, and devours her alive. 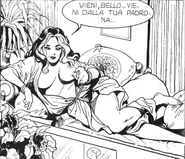 ...as well as reading up on "The History of the Asshole". 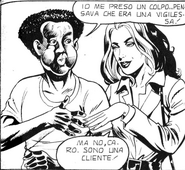 Retrieved from "https://femalevillains.fandom.com/wiki/Olinka_Casanova-Romanoff_(Superfumetti)?oldid=208149"
Community content is available under CC-BY-SA unless otherwise noted.