Start a Wiki
watch 01:48
The Loop (TV)
Do you like this video?
Olga is the villainess in the 1949 episode "The Clinics of the Cruel" #25 for the comic book, Rulah, Jungle Goddess.

Olga with the assistance of a thug named Henri, kidnaps Dr. Ken Mathews.  In addition, she shot Rulah's pet panther, Saber in the shoulder.

Olga then used the spinning head of a knife blade to hypnotize the doctor after injecting him with a drug.  As a result, the doctor would obey every wish of hers.

When Rulah arrived to save the doctor, Olga provided a show for her.  She had her new slave, Ken Mathews pretend that they were in love with each other.  Olga's thug Henri attempted to shoot Rulah from the bushes, but was attacked and killed by Saber.

Dr. Mathews woke up from his slumber and tried to aid Rulah.

Olga was captured by Rulah's natives.  She threatened Rulah, by telling her not to dare touch her, claiming that her "Government will send troops, wipe you out, burn your jungle".

However, Olga's intention of conducting experiments and using bacterial warfare on the natives was found out.  She was arrested and the authorities were alerted to her plans. 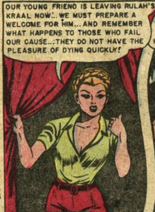 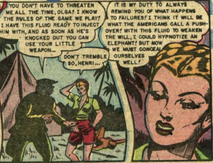 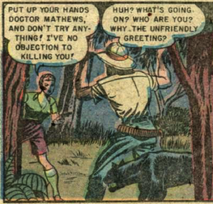 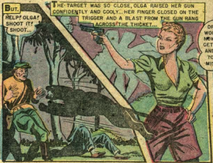 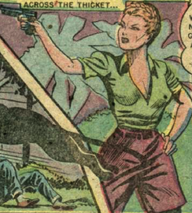 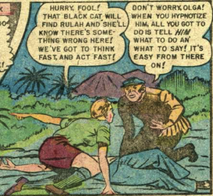 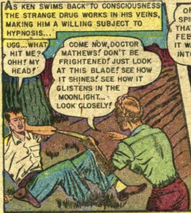 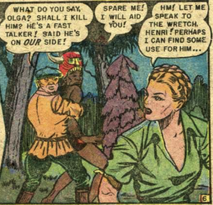 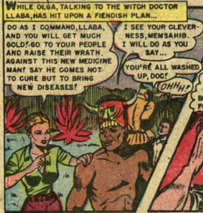 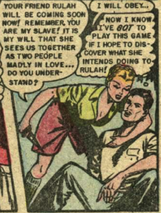 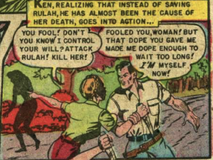 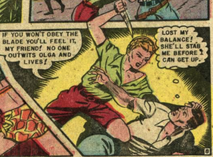 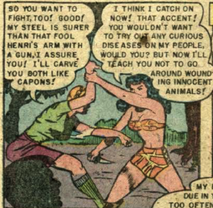 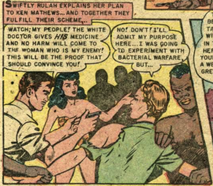 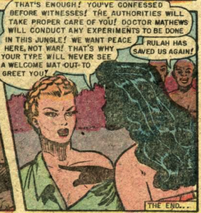 Add a photo to this gallery
Retrieved from "https://femalevillains.fandom.com/wiki/Olga_(Rulah,_Jungle_Goddess)?oldid=155409"
Community content is available under CC-BY-SA unless otherwise noted.