Olga (no last name given) appears in "James Bond - Trouble Spot", a UK newspaper comic strip which ran in The Daily Express from December 28, 1971 to June 10, 1972. The story was written by Jim Lawrence and illustrated by Yaroslov Horak.

Olga is henchwoman to the evil Baron Sharck, an arch-villain who has worked for both Nazi Germany and the Communist USSR.

Bond is on the trail of a mysterious box which contains something very important. Both British intelligence and the Soviets desperately wish to get hold of it. The box had been in the hands of a man called Mike Channing, who died in an accident. Bond teams up with Channing's rather mercenary former girlfriend, Gretta, and Channing's blind widow, Folly, to retrieve the box. But the sinister Baron Sharck and his minions are also after the box, and will stop at nothing to get it.

Olga is a good looking white woman of about 30 with shoulder length straight dark hair. She wears a bikini type bottom with fishnets and black boots. She is is a cold blooded villainess with no redeeming features apparent. She is a ruthless sadist. When Baron Sharck has Bond and Gretta captive, the villains try to extract information about the whereabouts of the box from Bond. They strip and tie up Gretta. Olga, relishing the situation, holds flourishes a whip, with which, says the Baron, she will strip the skin from Gretta's back if Bond doesn't talk. She is armed with an automatic handgun and a whip.

Olga has the job of bringing Bond to Baron Sharck, which she does at gunpoint. She prepares to cruelly whip Gretta in order to force Bond to tell Sharck what he wants to know (Bond actually can't answer the question). But when the Baron has to leave the room, Bond manages to turn the tables on Sharck's hoods, taking down the henchmen; when Olga desperately lashes out with her whip at him, Bond grabs it, yanking the villainess to him and wrapping the whip round her neck. He then makes her untie Gretta. Gretta then ties up and gags Olga, who Bond calls "Little Miss De Sade." Bond and Gretta then make their escape. Later, Olga is with Baron Sharck and his other thugs in the final confrontation, when the villains have trapped Bond, Gretta and Folly in an excavation construction site, from where the trio have finally retrieved the box.

Trapped at an excavation site facing the gun toting Baron Sharck and his hoods plus a napalm bomb armed helicopter the villains have called in to assist them, Bond and Folly (Gretta has already been gunned down by Sharck's killers) commandeer a massive mechanical digger. Bond turns the machine's shovel up towards the Baron and his gang who in panic flee to their car; one henchman is scooped up and dropped from a height, then the shovel picks up the Baron's car, with the arch-villain, Olga and the other henchman inside. Bond then swings the digger's arm into the helicopter, smashing it, this causes Sharck's car to drop out of the shovel and hurtle into space. The helicopter explodes, the napalm engulfing it and the car as well - the blazing copter and car, containing Olga and the rest of the evil doers, topple down a cliff, the villains meeting a fiery, explosive demise - one they intended for Bond and Folly. 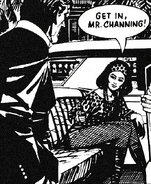 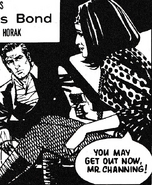 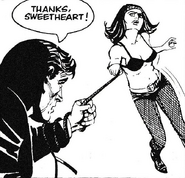 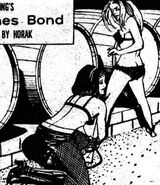 Add a photo to this gallery
Retrieved from "https://femalevillains.fandom.com/wiki/Olga_(James_Bond)?oldid=197331"
Community content is available under CC-BY-SA unless otherwise noted.