Start a Wiki
watch 01:48
The Loop (TV)
Do you like this video?
Odelia (voiced by Lillian Carlson), also known as "The Evil One", is the villain of the 1995 anime version of Sleeping Beauty.

Odelia is a wasp-like and hateful fairy witch who is angry after King Torrance and Queen Glorie, thinking her dead, did not invite her to the baby shower of Princess Felicity, and thus curses her to sleep and die one week after her 16th birthday. The good fairy Primrose alters the spell so Felicity would sleep for 100 years until being kissed by the prince, which is when Odelia shall die. But Odelia learns of that and works to stop this from happening before it is too late for her.

For a hundred years, Odelia successfully keeps preventing any prince from reviving Felicity. But eventually, the young Prince Richard manages to put end to Odelia's curse as indeed well as her life in a triumph of love over evil. 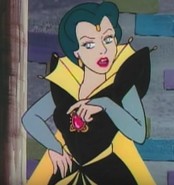 Odelia laughing as she turns the prince into a statue. 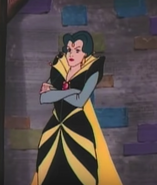 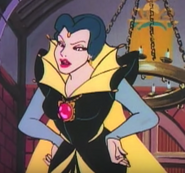 Add a photo to this gallery
Retrieved from "https://femalevillains.fandom.com/wiki/Odelia_(Sleeping_Beauty)?oldid=197873"
Community content is available under CC-BY-SA unless otherwise noted.