Start a Wiki
watch 01:48
The Loop (TV)
Do you like this video?
Nyree (Liberty Godshall) is a minor antagonist in the 1979 episode "Planet of the Amazon Women" for the TV series "Buck Rogers in the 25th Century".

Capt. Buck Rogers (Gil Gerard) is out flying his Starfighter in Ruathan space. He picks up a distress call from the space yacht Aurora. The seemingly disabled ship is floating in space with no power, and its orbit is decaying. With no repair equipment, the Aurora is stuck in space, drifting. The two pilots, Linea (Teddi Siddall in red suit) bets Nyree (in yellow suit) 10 credits that Buck is fat and has a nose like a subspace relay. Buck switches on his visual video to the relief of both women. The two women ask for a tow back to their Colony, Zantia. Zantia is closed to the Directorate, making Buck not authorized to enter Zantian space. The two sisters insist until Buck agrees.

Linea and Nyree talk to their "uncle", Cassius Thorne (Jay Robinson), regarding the condition of the Aurora. The three thank Buck for his help and insists that he stay so they can "thank him". Cassius, using his influence with the Spaceship Authority, allows Buck to stay for at least the night. Cassius instructs Linea to make the dinner arrangements, and Nyree to show Buck around. After Buck and Nyree walk off, we learn that there is a more sinister plot in bringing Buck to the Planet.

Buck is brought to the Prime Ministers quarters believing it was Linea and Nyree's room. Linea serves her favorite drink, Centauran brandy and tries to slip a little something into Buck's glass. Cassius brought Buck to the room of the Prime Minister (Anne Jeffreys) so she could evaluate him for her daughter, Ariela Dyne (Ann Dusenberry). Her daughter, has other plans instead of being married to Buck, like leading the opposition against her mother's policies. The Opposition is against: The policies isolating Zantia from the outside worlds. Maintaining the illusion that the world is inhabited by men to avoid being invaded. The passing of Laws that allow the kidnapping of men and selling them at auction to be the husbands of the local women. Buck, being too smart to be drugged by the two flirty sisters, is held up at gunpoint by Cassius. With a slow roundhouse kick, that misses, Cassius's gun is knocked from his hand, and the next thing he knows, the sisters are up on their feet ready to fight. Cassius suggests shooting Buck with their weapon. So Linea pulls out some stick out of her money changer located on her belt and fires some kind of lasso energy beam around Buck, causing him to black out. Cassius then scolds the women for having to shoot Buck that caused a wound. Wasn't that his idea to shoot Buck? Anyways, as long as Buck remains undamaged, Cassius is hoping to bring in at least 10,000 credits for selling him to the Prime Minister.

This is the last we see of the sisters, and it is not known if they received any consequences. 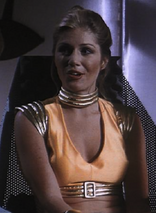 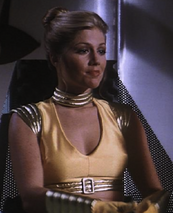 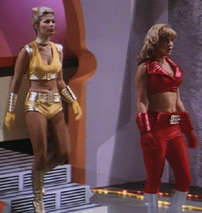 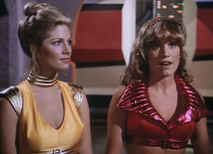 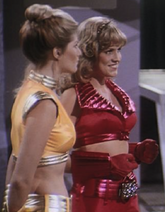 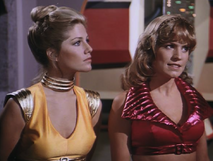 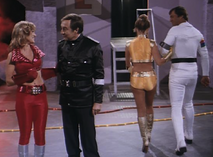 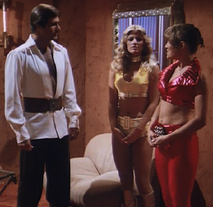 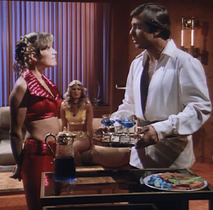 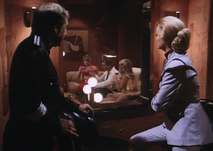 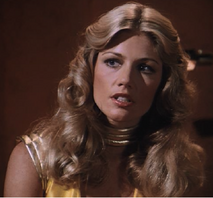 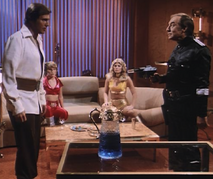 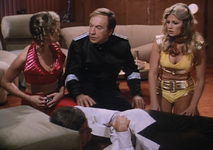 Add a photo to this gallery
​​​​​​
Retrieved from "https://femalevillains.fandom.com/wiki/Nyree_(Buck_Rogers_in_the_25th_Century)?oldid=132265"
Community content is available under CC-BY-SA unless otherwise noted.